Canada's Marine Oil Spill Preparedness and Response Regime is built on the polluter-pay principle, which makes the polluter liable for all response costs associated with an oil pollution incident.

A protection and indemnity association of shipowners and operators known as the International Group of P&I Clubs offers insurance coverage to shipowners and charterers against third-party liabilities encountered in their commercial operations. In addition to this, there are currently two funds to assist in paying for clean-up costs:

The following graph from the Ship-Source Oil Pollution Fund, taken from the Administrator's Annual Report 2009-2010, illustrates how these two funds cover liability in the event of an oil spill.

Figure 1. Current Limits of Liability and Compensation for Oil Tanker Spills in Canada
Based on the value of the SDR (1) at April 1, 2010 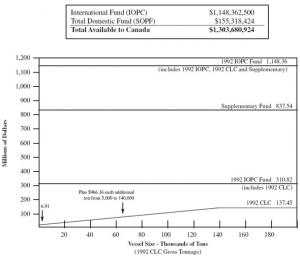 Figure 1 shows the current limits of liability and compensation available under the 1992 CLC , the 1992 IOPC Fund Convention, and the SOPF for oil spills from tankers in Canada, including the territorial sea, and the exclusive economic zone. See the Marine Liability Act. Because of the SOPF , Canada has extra cover over and above that available under the international conventions.

In addition, excepts from this report provide details on liability claims under the Canadian Compensation Regime, as well as changes continuing under the 1992 Protocols.