Through Canada’s Oceans Protection Plan, the Enhanced Maritime Situational Awareness (EMSA) initiative was co-developed with Indigenous communities and industry to provide near real-time vessel activity and other marine environmental information in local waters through a user-friendly web platform.

Since the launch of the EMSA system in 2019, many Indigenous and coastal communities across Canada have adopted the technology, improving their situational awareness on the water.

Through the next phase of the Oceans Protection Plan, EMSA will continue to grow the number of Indigenous community partnerships and be integrated into other Oceans Protection Plan initiatives. The system itself will also be enhanced to further improve marine safety, environmental monitoring, and protection.

We’re working with Indigenous communities across Canada to develop and test a user-friendly web-based system. The system improves access to maritime information and data, including vessel traffic, for Indigenous peoples, coastal communities and other partners.

It provides an accessible and near real-time common operating picture for coastal communities and supports local and collaborative planning, analysis and decision-making.

This will help communities:

We want to increase the amount of useful and trustworthy information on maritime activity that is available to coastal partners and stakeholders and help local decision makers by giving them accurate and detailed information.

Data sources and types of information

Numerous engagement sessions have provided valuable input on what types of information to include in this new web based maritime awareness information system.

We have also looked at various existing systems around the world to help us understand opportunities in Canada for enhancing awareness of marine activity.

Based on this, sources and types of information in the system include:

The system will include both static and dynamic data.

Static data does not change significantly over time. It includes:

Building and testing the system

In February 2019, representatives from ten Indigenous communities and organizations from Canada’s coasts met in Ottawa, alongside representatives from Transport Canada and the Canadian Coast Guard to evaluate solutions demonstrated by companies developing the maritime awareness information system.

As a result of this process, Fujitsu (Canada) Inc. was selected to develop, host and maintain the system and will work closely with Transport Canada and partners to ensure it meets user needs across Canada.

This new system will use information from a range of data sources, such as federal government departments, academia and science organizations. The pilot project system was launched in the ten Indigenous communities across Canada in May 2019. Pilot host communities have been working in partnership with us to develop, test and evaluate the system. In December 2019, three additional partners were selected to join the project through a collaborative selection process. 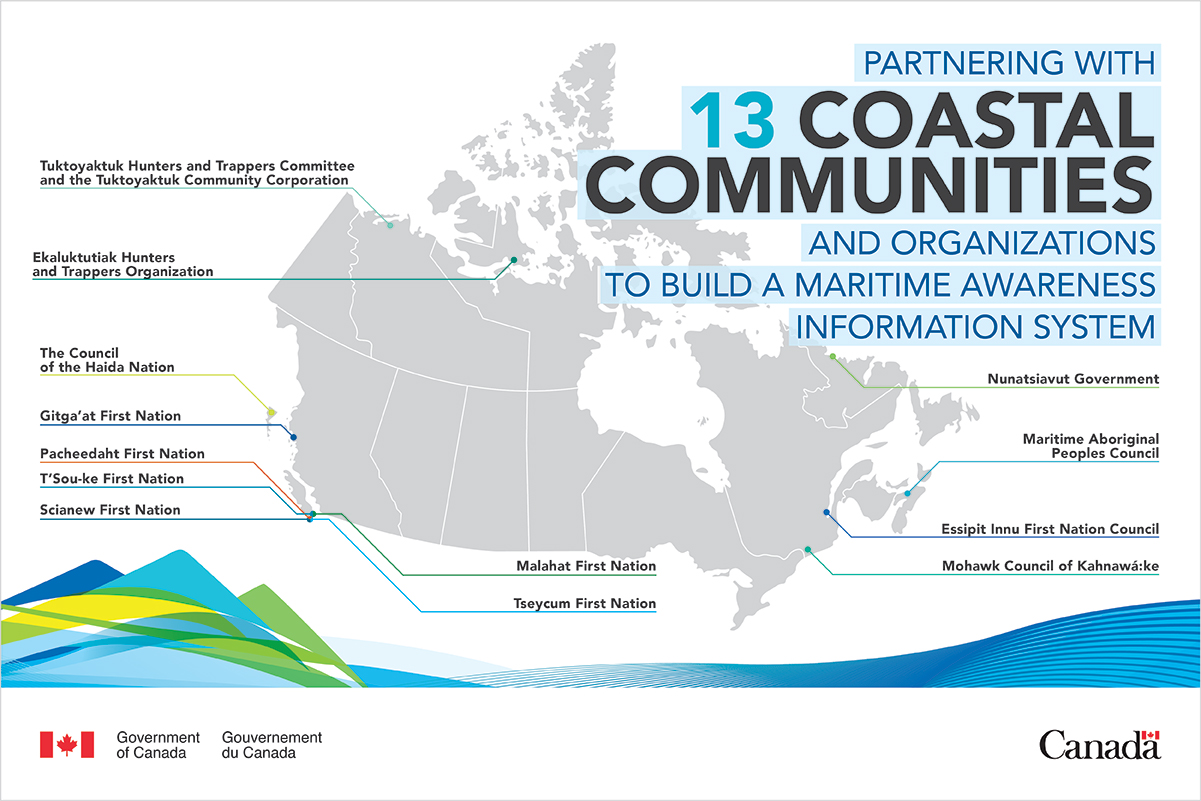 We used a collaborative process to choose pilot project hosts. How communities were selected varied across Canada, for example:

Transport Canada is working closely on this initiative with the Canadian Coast Guard and other federal partners. They include Fisheries and Oceans Canada, Environment and Climate Change Canada and the Canadian Space Agency.

We are also working with:

We will continue to ensure we take a wide range of perspectives into account as we develop this system. We will also maintain a conversation with communities and others not involved in piloting the system.

To see one example of how the Enhanced Maritime Situational Awareness system is being used, please check out the video: How the Oceans Protection Plan is improving marine safety in Tuktoyaktuk.

If you have questions or comments, please e-mail us: