Corrections to the Emergency Response Guidebook

Corrections to the ERG2020

Corrections to the ERG2016

Corrections to the ERG2012

Corrections to the ERG2008

1) IMPORTANT: A printing error has been reported that appears in a limited number of copies of the English version of the ERG2008 books. The error is that the first part of the blue section in the alphabetical listing from pages 97 to 128 has been duplicated and therefore appears twice. The alphabetical blue section that normally follows is missing (pages 129 to 160). Please verify your copy of the ERG2008 for accuracy and report any errors to CANUTEC at canutec@tc.gc.ca.

2) ERRATA on page 16 of all three versions (English, French and Spanish), the drawing for the Class 2.3 placards has been modified. The new placard for Ammonia, anhydrous (UN1005) should be displayed separately and refer to GUIDE 125. 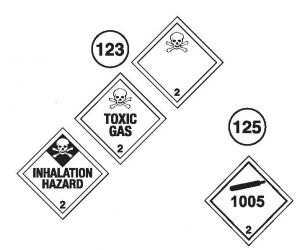 3) ERRATA on page 144 of the English version. Please correct the entry on page 144 (fourth item) for "Petrol and ethanol mixture, with more than 10% ethanol". The ID No. in the Guidebook is written as 347. The correct ID No. should be 3475 and not 347. This error is only present in the english version of the Guidebook.

Corrections to the ERG2004

1) ERRATA on page 18 of the French and Spanish Guidebooks (only Spanish copies printed in the United States), the drawings depicting pressure and non-pressure tank cars were mistakenly interchanged.

The illustrations should appear as below in the French and Spanish Guidebooks:

2) ERRATA on page 19 of all three versions (English, French and Spanish), the following codes: (MC306, TC306) that appear in parentheses under the top right drawing should read (TC341, CGA341) as per illustration below:

Corrections to the ERG2000

A mistake was found in Guide No. 167 for the online and downloadable versions, and not in the printed book. In section for Fire, the heading Small Fire was repeated. The second entry should have read Large Fire. This has been corrected. If you are using the downloadable version, we invite you to please download the new version.

Comments about the Emergency Response Guidebook

We welcome your questions or feedback, especially comments about using the guidebook for incidents that involve dangerous goods. Please send feedback to: