This study found statistical relationships between the measured properties of crude oil, and found that measures of flammability could be predicted, but that the errors associated with the model predictions could limit model application.

Efforts have been undertaken in both Canada and the United States (U.S.) to better understand crude oil characteristics and to better assess some of the risks involved in transporting crude oil. The Crude Oil Research Coordination (CORC) Steering Committee, comprised of representatives from the U.S. Department of Transportation (DOT), U.S. Department of Energy (DOE) and Transport Canada (TC), oversaw the Crude Oil Characteristics Research Sampling, Analysis and Experiment (SAE) Plan.

To complement the work done under the SAE plan, TC undertook a crude oil sampling and analysis campaign in 2019 to acquire 25 samples of crude oils representative of what is transported by land in Canada. The samples collected represent a distribution of heavy, medium, and light oils; tight and conventional sources; sweet and sour; and included some condensates and dilbit.

The crude oils were characterized by measuring their physical properties (such as density and viscosity), chemical properties (such as sulfur, carbon residue, and water content), flash point, initial boiling point, heat of combustion, vapour pressures, liquid phase compositions, and vapour phase compositions. Two (2) samples which did not meet the flash point criteria to be classified as a Class 3 dangerous good were excluded from further analysis. The results from the remaining 23 samples were combined with results from six (6) previous Canadian sampling campaigns and assessed in the current work.

The purpose of this work was to gain a better understanding of which crude oil properties have the greatest impact on flammability properties (flash point and initial boiling point) and heat of combustion. This was accomplished by conducting statistical analysis of physical and chemical properties, composition, heat of combustion, and flammability properties of the Canadian crude oil samples. This understanding was used to determine whether initial boiling point by gas chromatography (IBP-GC), flash point, vapour phase hydrogen sulfide (H2S) at two (2) test conditions (vapour/liquid ratio of 0.1:1 and 4:1), and gross heat of combustion (HEAT) (together called "outcome properties") could be predicted using other measured properties. To achieve this aim, a series of statistical analyses were performed to address three (3) statistical goals:

To facilitate an exploratory analysis of the available data, properties were grouped into categories, such as gases, light ends (C1-C5), heavy ends (C6-C25+), and physical properties. The relationships between the four (4) primary outcome properties (IBP-GC, flash point, vapour phase H2S, and HEAT) and these groups of properties were explored graphically to check for outliers and observe underlying statistical relationships.

Many of the measured crude oil properties are statistically interdependent, and the analysis concluded that statistical relationships exist between three (3) of the primary outcome properties and the other properties measured across the crude oil samples.

Initial analysis of flash point revealed an imbalance in the data; almost all values were reported as <-30 °C. Without exact values, statistical relationships could not be determined between flash point and other crude oil properties, and further analysis was not pursued.

The largest magnitude correlations (positive or negative) between crude properties were found between core heavy end properties and other physical properties, such as density, viscosity, and sulfur content. Correlations between other groups of results were generally smaller.

The primary outcome property of IBP-GC showed negative correlations, with most of the lighter end components for both groups of samples.

Both model types (partial least squares and random forests) were able to predict IBP-GC. However, it is not clear if the error associated with the model is sufficiently small for the models to be of practical use. Both measures of vapour phase H2S were only weakly predictable by either model type.

Gross heat of combustion was much more predictable, with the error approaching that of the laboratory test method.

To look for patterns in the crude oil data, two (2) clustering methods were used: K-means and partition around medoids (PAM). Both methods gave very similar results. Density of crude oil (and properties related to density) seems to be a main driver of the clusters for both "2019 Samples" and "All Samples". 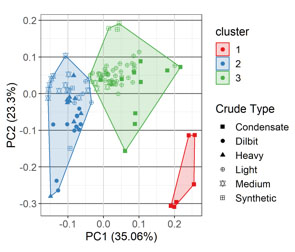 Figure 1: K-means clustering of the covariates for IBP showing 3 clusters and crude-types. All samples.

Figure 2: Density versus IBP by cluster and crude type. All samples.

Statistical relationships do exist between the flammability properties of crude oil and other crude oil properties.

Results of the statistical modeling showed that for both "2019 Samples" and "All Samples", HEAT was much more predictable than IBP-GC. Both vapour phase H2S properties were only weakly predictable, with predictive errors of 4,300 ppmv for the random forests model and 9,200 ppmv for the partial least squares model for the 0.1:1 ratio.

Density of crude oil (and properties associated with density) seems to be one of the main drivers of the statistical clusters. The three packing groups were not strongly related to the statistically identified clusters, implying that the clusters derived from the properties used are being driven by factors other than initial boiling point and flash point.

This project has concluded, and further work is not currently planned by TC’s Transportation of Dangerous Goods (TDG) Scientific Research division.

TC gratefully acknowledges the contribution of oil producers and terminal operators who provided access to their sites for sample collection.

We also wish to thank Ashutosh Garga of Alberta Energy, who coordinated the collection of a sample set as part of the Alberta Bitumen Assay Program.

This work was done with InnoTech Alberta, and TDG acknowledges the contributions of Amanda Prefontaine and Craig Aumann.

To obtain a copy of the report, please contact us: