During a frontal crash, a child will move towards the front of the vehicle. As the lap and shoulder belt holds the child back in his or her seat, it will stretch and tighten into a straight line from the child's shoulder to the point where it attaches to the vehicle. Throughout the crash, the booster seat must keep the lap and shoulder belt in place so the child can come to a controlled stop without getting hurt.

Since no law in the world requires these kinds of in-vehicle crash tests to assess the safety of boosters, why does Transport Canada do them? Because vehicle seats and child seat designs change faster than standards and regulations. We look for new areas of risk and decide if current regulations need to be updated to keep children safer than ever.

We use many vehicle models (that are common on Canadian roads) with different rear seat designs, different brands of booster seats and different ways of installing them. Using child dummies of similar sizes and weight to 6 and 10 year old kids as well as a young adolescent, we crash the vehicles at different speeds, in different kinds of crashes. We also change the position of the vehicle's front seats and the size and weight of the adult dummies in the vehicle. We may even install boosters and child/infant seats next to each other, since this often occurs in real life.

DESCRIPTION OF THE BOOSTER SEATS WE TESTED

The 37 seats tested are grouped into five types.

Booster seats can have a high back or no back. We tested three types of high-back and two types of no-back booster seats (please see images of each type in Figure 1). Most were purchased from local stores and a few were obtained directly from manufacturers as samples.

A high-back booster seat has a full back, a headrest and some guides to hold the shoulder and lap belt in place.

Type 1: Has a one-piece shell; the shoulder guide is fastened to the booster seat's fabric covering. Once threaded through the clip, the shoulder belt did not slide freely and does not retract.

Type 2: Has a one-piece shell; the shoulder guides are part of the seat mould and are located on the side. In most seats, the guides were in fixed positions.

Type 3: Can be one-piece or may have a back you can take off. The shoulder guide is a plastic loop between the booster seat's headrest and back. Unlike Type 1 and 2 seats that can be converted from a forward-facing child seat by removing the harness, these are often designed to be used only as booster seats and have seat backs and/or headrests you can adjust.

A no-back booster seat has no back or headrest and only has guides to hold the lap belt in place.

Type 1: Has a one-piece shell, with armrests that act as guides for the lap belt.

Type 2: Is a booster cushion or shell that is rigidly attached to the vehicle with the UAS (Universal Anchorage System) or lower anchors.

We installed and tested 231 booster seats in 144 motor vehicles. Most of the tests were done in vehicles during frontal crash rigid wall compliance tests (to assess the protection of front seat occupants) at 48 km/h, a severe crash. Others were done in vehicles during rigid barrier tests at 40 km/h, a moderately severe crash. The rest of the vehicle tests, including those done in the rear seat of a car that crashes into the side of a parked car, were less severe crashes.

NOTE: Transport Canada does not do these tests to rate, rank, or endorse individual booster seats. However, we did learn how various booster seats perform in frontal crashes and what types of designs performed better than others. At the present time in Canada, booster seats are not required to meet dynamic test requirements, where their performance is evaluated in simulated crashes on a sled apparatus.

The videos were analyzed and grouped into four categories:

Figures 4A through 4D show two seat types before and during the crash. Photo A is a Type 1 booster seat with the guides stitched to its fabric covering. There is good belt fit to start. The arrows follow the jagged path of the belt to its attachment point behind the dummy. During the crash, as the dummy and booster seat move forward, the belt stretches and straightens out along the arrow in photo B. The shoulder belt slides off the shoulder and allows the dummy to roll out of the belt. 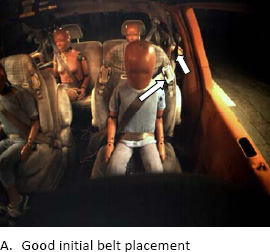 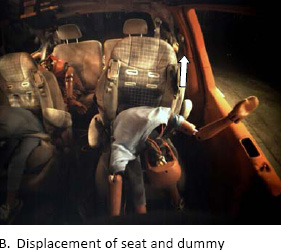 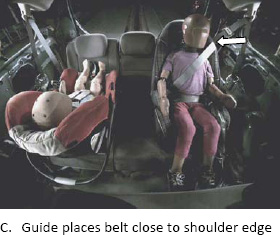 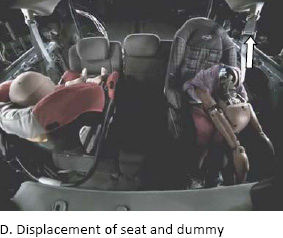 FIGURE 4: EXAMPLES OF DIFFERENT SHOULDER BELT GUIDES; THE BELT FIT BEFORE AND DURING A CRASH

In photo C, the belt guides are brackets on either side of a Type 2 high-back booster seat. In this case, the guide is too low, so the shoulder belt starts out near the edge of the shoulder. During the crash, the belt pops out of the guide and follows the path of the arrow shown in photo D, and the dummy rolls out of his shoulder belt.

In moderate to severe crashes, 65 per cent of the Type 3 high-back booster seats we tested gave good protection during a crash. The closeness of the guide to the shoulder helped the shoulder belt stay in place.

In Figure 5, both dummies were seated in the same Type 1 no-back booster seat model, but the attachment points for the two seat belts were different. A is higher than B. During the crash, the dummy on the left was held back by the shoulder belt and well protected. The dummy on the right rolled out of his belt, and was not as well protected. 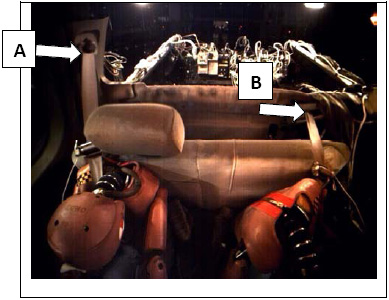 The Type 2 no-back booster seats attached to the vehicle with the lower anchors or UAS, worked well in mild crashes, but increased the risk of the belt injuring the child's abdomen and under the arm in moderate to severe crashes, especially when the child is sitting in a slouched posture. Why? 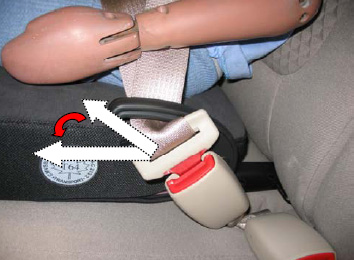 Exploratory testing was conducted beyond the scope of the research program described above, using an acceleration sled and U.S. regulatory testing conditions. During this testing, the dummies were seated erect and held in place using the lap and shoulder belt and the seat was attached to the vehicle using the UAS. The Type 2 no-back booster seat showed no evidence of the lap belt riding up over the abdomen . However, the shoulder belt was observed to slip off the dummy's shoulder during some tests. Transport Canada has not received any reports of in-use problem issues with these booster seats nor have we received reports from the public suggesting that the seats are defective or have caused injuries. U.S. Government authorities have indicated that they have not observed any noncompliance issues with similar U.S. market seats, are not aware of in-use concerns with the seats, nor received any allegations of defects from the public. It should be noted that the Type 2 no-back booster seats tested by Transport Canada may also be installed without the UAS attachment method, according to the manufacturer. Hence, acceleration sled testing was also conducted without attaching the seat to the vehicle using the UAS and the dummy was held in place by the lap and shoulder belt. Again, there was no incidence of the lap belt riding up over the abdomen. However, shoulder belt slippage did occur. In-vehicle testing without this rigid attachment will be conducted in the future.

This study looked at many different kinds of booster seats sold in Canada since 2003, to learn more about what is needed for a booster seat to work well and what to require in future regulations. We learned that:

Dynamic testing should be required in Canada and take into consideration:

On August 15, 2009 Transport Canada published a Notice of Intent to amend its child seat regulations. This Notice proposed adding dynamic testing requirements similar to those used in the U.S. and which conduct the testing using an acceleration sled.

HOW TO FIND A BOOSTER SEAT THAT FITS

A booster seat must fit both the child and the vehicle you plan to use it in.

Before buying a new booster seat or using a forward facing child seat that has been converted to a booster seat:

APPENDIX A: RESULTS FOR THE 6-YEAR-OLD DUMMY IN 35 TO 56 KM/H CRASHES BY MAKE AND MODEL OF BOOSTER SEAT

Key: n represents the total number of times that a booster seat was tested. The various numbers under the individual headings add up to n.

APPENDIX B: SUMMARY OF TEST SPEEDS AND RESULTS BY TYPE OF BOOSTER SEAT

NOTICE: This document is based in part, on an internal research report prepared within Transport Canada on the results of booster seat testing conducted during 2003-2009, as well as other internal sources of information.