What Can You Do?

Laws require companies that make child seats to test them for safety when secured as normal. The seats must pass tests for sudden changes in speed of 48 km/h using a device called a sled. Only seats that meet the legal standards for safety can be sold in Canada.

Transport Canada research programs recently did over 50 in-vehicle crash tests. Since no law in the world requires these kinds of crash tests, why does Transport Canada do them? Because vehicle seats and child seat designs are always changing. We look for new areas of risk and decide if current regulations need to be updated to keep children safer than ever.

The types of crash tests we did

The infant seats were installed in the rear seats of vehicles undergoing four different kinds of frontal crash tests:

Tougher standards for vehicles and child seats, as well as more police enforcement, have helped lower the number of children killed or hurt in vehicle crashes, even though more vehicles are on the road than ever before. Transport Canada will continue to work to ensure children are as safe as possible.

The vehicles' rear doors were removed and replaced with beams so high-speed video cameras could get a complete view of the infant seat during the crash test.

How we installed infant seats

All but one seat were installed following the owners manuals' instructions. And while most tests used the seat and its base, three tests were carried out without the base.

The bases were attached either with the vehicle's lap and shoulder belt (often called a three-point belt) or with the lower anchors (also called the universal anchorage system or UAS). All seat bases were attached very tightly to the vehicle seat to reduce the amount of sideways movement. All vehicles were recent models and equipped with three-point belts in all seating positions. No in-vehicle tests used a two-point (lap only) seat belt found in some older vehicles.

In some tests, the driver and front passenger seats were placed as far to the front as possible, leaving a space between the front seat back and the infant seat, like this: 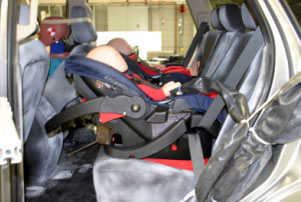 In other tests, the driver and front passenger seats were placed either in the middle or rearmost position, leaving little or no space between the infant seat and the front seat back, like this: 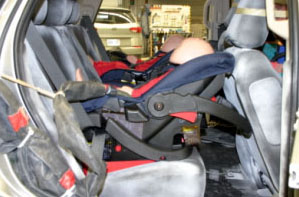 In one vehicle, we left the seat's handle in the carry position because there was not enough space for the handle to fit between the front and the rear seat. We know this is against the manufacturer's instructions, but we also know that some people may install their infant seats this way because they have no other way to install them.

How safe are the seats we tested?

Most seats did not separate from their base at 48 km/h. However, higher speed crashes could increase the chance of a seat separating from its base, as we learned during tests. Overall, the infant seats we tested provided excellent protection both in mild crash tests and in the most severe crash tests at 56 km/h.

During a frontal crash, the infant seats will rotate or swing towards the seat back. The video images may seem shocking at first, but this is in fact, the way they are designed to work. When the seat is correctly installed and the infant is securely restrained by the seat's harness, the infant remains in the seat shell and is very well protected from the violent forces of the crash. In severe crashes, the infant's face may come into contact with the top of the seat back they are facing or its headrest, but since this part of the seat is generally soft, the risk of injury is low.

Remember: Children are always safer in a seat that's properly installed and meant for a child of their age, size and weight.

Test results by method of attaching the infant seat

Since head contact can be difficult to measure simply from watching videos, instruments inside the crash test dummy head measure how quickly the infant's head changes speed and how hard it hits a surface (impact). What these tests show is that head impact greater than 80g, which could cause injury, was proven to occur in certain cases.

In the sample of 86 infant seat tests:

We also did side-by-side tests to compare the lower anchors (UAS) and lap and shoulder belt attachment methods in the same vehicle. We attached two identical infant seats with bases behind the driver and the passenger seats of seven vehicles during a frontal wall crash at 48 km/h and in one vehicle during a wall crash at 56 km/h (the Eddie Bauer Surefit test). You can see the results of the eight paired tests in the chart below. It shows that: 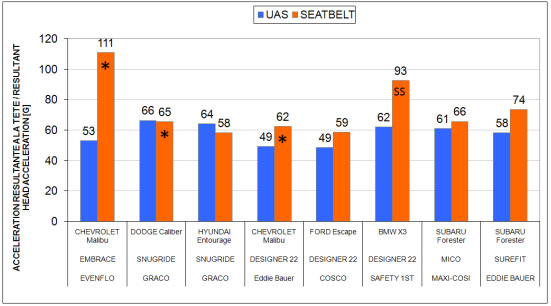 Some seats separated from their base

In severe frontal crashes, three models of infant seats separated from their bases:

Crash severity is a factor

The severity of a crash depends on the speed at which the collision occurs and how the vehicle absorbs the energy of the crash. Remember, we used only some vehicle models that are common on Canadian roads. Vehicles that are able to slow down more gradually during a crash transfer less energy to a seat. This reduces the likelihood that a seat could separate from its base.

What else we learned

Some Designer 22 seats made from a different mould performed differently. Whether these seats were secured with the lap and shoulder belt, the lower anchors (UAS) or a lap only belt, in both vehicle and sled tests they developed cracks that extended from the top surface of the base, down the side and through the attachment point of the rod in the base.

What do our test results mean?

Most seats did not separate from their base at 48 km/h. Only two seats had a pattern of separating from their bases. However, higher speed crashes increased the chance of those seats separating from their bases. We bought all of the seats we tested from local stores. They all complied with Canadian regulations, but the required tests did not identify a risk of head impact or detect seat separation or base cracking. Why not? Child seats in Canada and the US are tested using what is called a bench seat (Figure 1) mounted on a sled that simulates the speeds and forces of a crash. 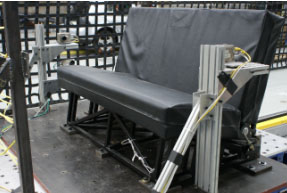 Differences between a bench seat used for compliance testing and in-vehicle seats include:

Overall, the infant seats we tested provide excellent protection, even in severe crash tests. The tests show how violent a crash can be and how important it is to use an infant seat and to secure it tightly to the vehicle seat with the lower anchors (UAS), if you can. It is also very important to make sure that the seat harness fits snugly so your infant remains in the seat's protective shell.

A case for changing regulations?

Existing regulations have really helped reduce the risk of death and injury for infants travelling in vehicles, but there is room to reduce that risk even more. Transport Canada takes the safety of children very seriously and we are always looking for ways to improve that safety by changing our regulations. Opportunities we identified for infant seats are:

Since the North American markets for children's restraint systems are so integrated, Canadian and US regulators are working together closely. Transport Canada is developing a proposal to update its regulation. Consultations with the U.S. regulators and North American children's restraint system manufacturers are ongoing, to help ensure that Canadians will have continued access to a broad selection of safe and affordable seat models. On August 15, 2009, Transport Canada published a Notice of Intent to amend its child seat regulations:

Transport Canada will continue to develop and issue notices to inform parents and caregivers of safety issues related to children's restraint systems as well as child road safety in general.