Find your category of drone operation

In Canada, there are 2 main categories of drone operation: basic and advanced. Each one has a different set of rules drone pilots must follow.

The weight of your drone, distance from bystanders and airspace rules define your category. The rules do not treat people who fly drones for fun or for business differently.

If you meet all 5 of these conditions, you're conducting basic operations:

If you do not meet any 1 of these 5 conditions, you are conducting advanced operations.

For basic operations, here are some of the rules you must follow:

If you meet any 1 of these conditions, you are conducting advanced operations:

For advanced operations, here are some of the rules you must follow:

You can only use drones that meet the safety requirements for the operation you want to conduct. See tips on choosing the right drone before you fly.

Know before you go!
Find your drone category

Micro-drones are drones weighing less than 250 g. The weight of the remote control is not factored in to the weight calculation, but the weight of anything attached or carried, such as optional cameras or safety cages, will be considered part of the weight.

Pilots of micro drone don’t need to register their drone or get a drone pilot certificate to fly them. Pilots of micro drones are not bound by the same requirements as other drones. However, you must not operate your drone in a reckless or negligent manner as to endanger or be likely to endanger aviation safety or the safety of anyone.

While there are no prescriptive elements of the regulations, there is an expectation that the pilot of a micro drone to use good judgment, identify potential hazards, and take all necessary steps to avoid any risks associated with flying your drone.

As a good practice, you should always:

Follow these guidelines to avoid flying in a negligent or reckless manner and being subject to fines. Enjoy a safe flight and minimize the risk of incidents. Remember: if you feel that your flight is risky, don’t do it.

Micro-drones are considered aircraft under the Aeronautics Act and Canadian Aviation Regulations and are therefore prohibited to enter the following zones without the proper authorizations:

If your drone weighs over 25 kilograms or you want to fly outside the rules, you will need to get special permission from Transport Canada before you fly. 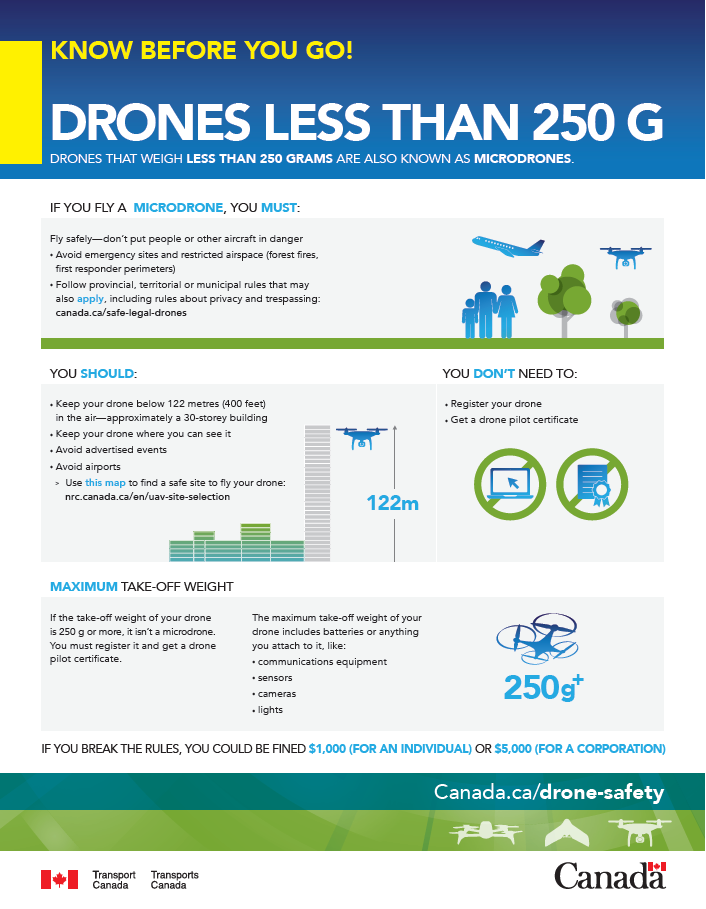