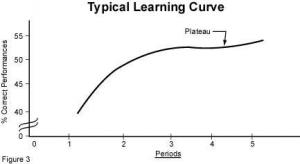 d. Slumps or plateaus in the rate of learning are more likely to occur as your student advances to more complicated operations, such as hovering or transitions. Often the reason is that a student has failed to master one basic element of the operation, which leads to the appearance of deficiency in the performance of later elements. Improvement usually becomes normal again when this one basic element is mastered. You can accelerate improvement by careful fault analysis and by concentrating instruction on that one phase of the operation concerned.

e. Without competent instruction, students will probably not understand why they aren't improving and will become discouraged. This discouragement tends to prolong the plateau. During such periods of discouragement, you should step in to isolate and correct the situation, and to provide special incentives until normal progress is resumed.

f. Reversals sometimes occur, during which a student's performance becomes worse with continued practice. Generally such reversals are due to a faulty habit pattern involving one of the basic elements of the manoeuvre or operation involved. This faulty habit causes your student to practise an erroneous performance repeatedly, until correction becomes very difficult. You must not accept such errors and misunderstandings as normal plateaus in the learning process. They must be corrected before progress can resume.

g. During advanced stages of learning, the rate of progress can be very slow. Example: An acrobat who can perform a routine to a level of 9.6 continually practises to improve the performance. Raising the score up to 9.8 or 10 requires extensive training and practise. Students may be nearly ready for a flight test at an early stage and added training will only show slight, slow improvement.

h. Reversals in the rate of learning could also take place if you were to place too much emphasis on a single phase, element or manoeuvre.