The purpose of this Civil Aviation Safety Alert (CASA) is to raise awareness of the possibility to inadvertently activate the MASTER power emergency switch on Pilatus PC 12 45, Manfacturer Serial Numbers 321, 401 to 999).

During flight in moderate turbulence, a Pilatus PC 12 aircraft encountered a severe bump, forcing the co-pilot to brace himself and in the process hitting the sun visor directly above him. The sun visor swung over and contacted the master power emergency electrical switch located on the overhead Electrical Power Management (EPM) control panel which turned off all electrical power to the complete aircraft. Even though the red switch guard was in the normal guarded or “gated” position, the master power emergency electrical switch was able to be inadvertently activated to the “off” position.

It was difficult for the pilot to quickly understand what had happened and after approximately one minute, a reset of the master power emergency electrical switch was done, restoring all electrical power.

Upon further investigation by the Aircraft Maintenance Organization (AMO), it was discovered that the sun visor`s rotational arc is in a direct path of the master power emergency switch on the EPM control panel. It was also discovered that with enough sun visor inertia, the ability to overcome the switch guard and force the switch to its “off” position was possible. However with the guard in place, the switch could not be operated by hand.

Through the investigative research and operational tests by Pilatus engineering, it was determined that the wear within the affected switch guard hinge, coupled with its possible deformation, provided an excessive amount of free-play vertical movement. This wear, at the switch guard, increases the possibility for the master power emergency swtich to move to the "off" position and be activated when contacted by a significent strike from the sun visor. 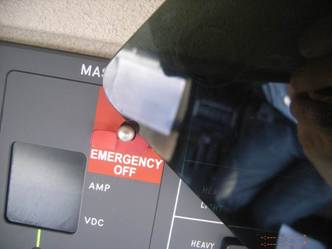 Transport Canada Civil Aviation is advising all Pilatus PC 12 45 (MSN 321, 401 to 999) operators and maintainers of this possible scenario. It is reccomended to ensure proper stowage of the sun-visor during operation and to confirm the serviceable condition of the master power emergency switch guard.

Note:
For the electronic version of this document, please consult the following Web address www.tc.gc.ca/civil-aviation-safety-alert