This CASA is issued to inform owners and maintainers of PA-25 series aeroplanes of a potential unsafe condition regarding the fatigue failure of end fittings on Piper PA-25-235 Main Landing Gear Hydrasorb shock absorber assemblies.

Following the investigation of a main landing gear collapse on a Piper PA-25 aeroplane, the Transportation Safety Board of Canada (TSB) has issued to Transport Canada Civil Aviation (TCCA), TSB Advisory Letter A10W0092-D1-A1.

It has been determined that there have been at least six similar occurrences involving both foreign and Canadian registered aeroplanes.

TCCA believes this information is of value to all Piper PA-25 series aeroplane owners and maintainers as it may assist in preventing further incidents.

The following information is derived from the TSB Advisory Letter.

Following a normal three-point touchdown, the right main gear of a Piper PA-25-235 collapsed. The aeroplane ground looped and came to rest with the right wing on the ground. The propeller struck the ground under low power and the right wing sustained minor damage. There were no injuries. 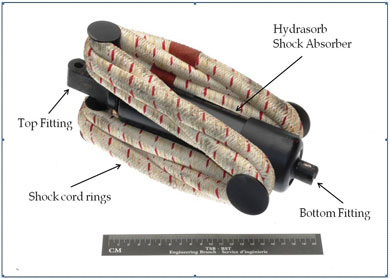 Both main landing gear shock strut assemblies were submitted to the TSB Laboratory for metallurgical examination. It was determined that the right Hydrasorb shock absorber had failed due to the instantaneous overstress extension of a high-cycle fatigue crack through the bolt hole in the bottom end fitting (see Photo 2). 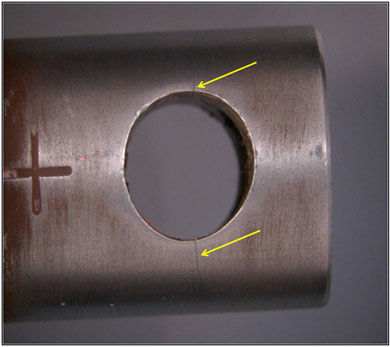 A similar fatigue crack was found on the bottom end fitting of the left Hydrasorb shock absorber (see Photo 2). In both cases the fatigue cracking had initiated from multiple origins located at the sharp edge of the bolt hole and at residual tool marks on the bolt hole surface which had acted as stress risers. Examination showed that the lack of a chamfer on the bottom end bolt holes and the use of non heat-treated steel were contributory to the fatigue failures of the bottom fittings.

Univair Aircraft Corporation received FAA-PMA approval to manufacture the U486-604-1 Hydrasorb shock absorber on 15 September 2003. A total of 45 shock absorbers were produced under Univair work order 104040.  These shock absorbers were sold individually or as part of the U64052-003 assembly. Neither the Piper Aircraft Corporation original equipment manufacturer (OEM) specifications nor the Univair specifications required chamfering of the bolt hole in the top or bottom fittings or heat treatment of the fittings.

The Design approval holder, Laviasa of Argentina, is aware of these shock absorber end fitting failures and has developed Service Bulletin (SB) that introduces a safety cable to prevent spread or lateral movement of the main landing gear and also helps prevent wing damage should the landing gear collapse.

TCCA strongly recommends that all affected owners and operators pay close attention to the main landing gear shock absorber assembly, both during scheduled maintenance activity and during post and pre-flight inspection. To prevent unnecessary damage in the event of a failed Hydrasorb shock assembly, it is recommended to incorporate the Laviasa SB 25-32-04, or at a minimum, incorporate the cable installation as per the Service Bulletin.

Defects, malfunctions and failures occurring on aeronautical products are to be reported to Transport Canada, Continuing Airworthiness in accordance with CAR 521 mandatory Service Difficulty Reporting requirements.

Note:
For the electronic version of this document, please consult the following Web address:
www.tc.gc.ca/CivilAviation/certification/menu.htm