The Transportation Safety Board (TSB) conducted an investigation into this crash and both of the engines, Honeywell TPE331-6-252M, were sent to TSB facilities where the engine teardown was completed.

It was determined that the left engine failed as a result of the combustion case assembly (plenum) rupturing along its entire length and a portion of its circumference. The origin of the plenum rupture was determined to be a fatigue crack, located at a previous weld site located between the P3 and bleed air bosses. It is unknown at this time as to who or when this weld was carried out. A filler weld repair with a three-step, heat treatment process may be accomplished. 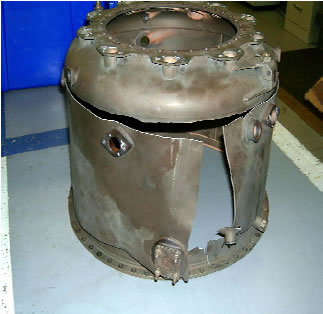 The right engine was found to be operating at high power on impact. The P3 and bleed air boss welds were examined by a fluorescent pentetrant inspection technique (FPI) using a 2X power magnification with no cracks noted. However, when this same location between the P3 and bleed air bosses was examined after the area was sectioned, a small crack about .5mm deep and 3.5mm long was visually detected along the toe of the P3 boss weld. It is believed that the crack opened up following the release of the residual stresses when cut. The crack was closely examined and found to be fatigue in nature, originating from the outer surface. No FPI was noted on the surfaces of the crack, likely indicating that the pentetrant had not seeped into the crack.

Review of past Service Difficulty Reports (SDRs) reveal numerous reports describing plenum cracks on various TPE331 series engines. Many of these defective plenums have resulted in in-flight shutdowns (IFSD) and/or aborted takeoffs. Numerous cracks have occurred at the weld lines on the outer combustor case. Cracks have also been found at the primary and secondary fuel nozzle locations, however most of the combustion plenums cracks occur between the welded boss of the bleed air takeoff port and the fuel control unit (FCU) P3 sense line. Other plenum cracks are reported to be from the installation of a too short piece of tubing that runs between the two-plenum drains causing undue stresses on these fittings. Cracks have also occurred around the igniter fittings in the welded areas due to over-tightening of the igniter.

There are many variants of the Honeywell (Garrett) TPE 331 series engines and the combustion plenum chambers are basically the same, however each plenum has a unique part number. The installation of a manufacturer’s one-piece plenum casting is highly recommended because it is less likely to develop fatigue cracks.

Transport Canada Civil Aviation (TCCA) recommends compliance with manufacturer’s (Honeywell) service bulletin (SB) TPE331-72- 2032 to change the combustion chamber from a 3102613-1 to a 3102613-2. This SB would provide a combustion case assembly with improved welds at the bosses.

TCCA also recommends that maintenance personnel be extra attentive to this area of the TPE331 series engines. When inspecting the welds of plenum assembly, maintainers are reminded that a good quality weld should be smooth and of uniform thickness and built up to provide extra thickness at the seam; tapering off smoothly into the base metal. The weld should show no signs of blowholes, porosity or projections, and the base metal should show no evidence of pitting, burning distortion or cracking.

A one engine inoperative (OEI) situation demands vigilance and good airmanship in the cockpit, especially during takeoff and climb out. It is critical that operators complete the required pilots’ operating manual (POM) checklist immediately after recognition that the engine has failed on takeoff and that the decision is made to continue with the departure.

Plenum cracks can result in engine failure, reduced engine power, high turbine temperatures and fire warnings due to hot combustion gases escaping through cracks and into the engine compartment. Localized scorching and/or fire can occur.

Any further defects or occurrences should be reported to Transport Canada, Continuing Airworthiness, Ottawa via the Service Difficulty Reporting program.