The R-985 engine (Wasp Junior) is an air-cooled, supercharged, 9-cylinder single row radial engine that entered service in 1932 and was later used in thousands of various military aircraft during World War II. Shortly thereafter, the R-985 engine entered commercial service on the aircraft such as the DHC 3 (Beaver) and the Beechcraft 18 (Expeditor). This engine remains in active and productive service.

Although the following FAA Airworthiness Directives were issued some time ago, the mandatory instructions and required actions contained therein remain effective.

Cylinder heads usually fail when the tensile strength of their material has been lowered by excess heat.
Furthermore, the majority of the heat developed within the engine is carried to the atmosphere through the exhaust valve, thus valve timing, seating and clearances must be correct. If the exhaust valve does not open at precisely the right moment, then the exhaust gases will not leave the cylinder at the right time. Consequently, heat and internal pressures continue to increase and be transferred to the walls of the combustion chamber and cylinder.

Before installing the cylinder assembly onto the crankcase, thoroughly clean the threads of the studs and inspect for looseness and fractures at the base of the threads. Also check the studs for straightness, nicks, burrs and closely inspect the thread condition of the nuts. When installing the cylinder assembly to the crankcase mounting pads (power section), make sure to use the approved and specified PWA Handle (referenced in the Wasp Jr. and Wasp Maintenance Manual) and tighten the hold-down nuts evenly to ensure even load distribution around the cylinder flange. Tighten the hold-down nuts to the recommended torque; install palnuts (running down finger tight) and then ¼ turn over the hold-down nuts.

It is very important that operators properly warm-up and cool-down the engine before and after flight. This will significantly minimize distress to the engine. It is essential that the cylinder assembly be adequately warmed up in order to “heat stretch” the cold cylinder, especially before applying high power. Failure to do so can lead to fatigue cracks and cause distress to the cylinder head and other rotating parts of the engine. Problems associated with cylinder head separation and cylinder barrel flange cracks can be minimized if attention to cylinder head temperature limitations is closely followed.

Adherence to the R-985 Specific and General Operating Instructions (Vol 1) is essential, in particular:

Operators and maintainers must take every precaution to avoid operating at excessive cylinder head temperature and excessive manifold pressure or incorrect (MAP) manifold absolute pressure-rpm ratios. These conditions will likely overstress the cylinders and other engine parts.  Excessive cylinder pressures and cylinder temperatures usually result in detonation, pre-ignition and loss of engine power.  This can lead to failure of cylinder base studs, flange cracks and/or separation of the cylinder head from the barrel.

A prominent domestic radial engine overhaul company (AMO) has introduced improvements at the interface threads that secure the cylinder head to the cylinder barrel. This thread restoration technique has greatly reduced occurrences of cylinder head separation and leaks.  A 1000-hour warranty is given on this new interference fit. Over 5000 cylinders assemblies have modified and routed to customers and only a few cylinders have been returned for warranty action. 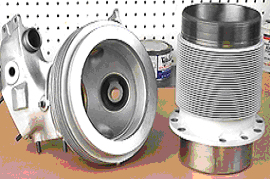 In accordance with CAR 591, any defects, failures or malfunctions should be reported to Transport Canada, Continuing Airworthiness via the Service Difficulty Reporting program.