Attention:
Owners and maintainers of aeroplanes that have an extensive and convoluted technical history

The purpose of this Civil Aviation Safety Alert (CASA) is to advise the aviation community that extra attention is necessary when reviewing the technical records of aeroplanes that may have an extensive and convoluted historical past, to ensure proper compliance.

In March 2012, the Office of the Chief Coroner of British Columbia produced the following report, "Death Review Panel: Four Fatal Aviation Accidents Involving Air Taxi Operations on British Columbia’s Coast". A copy of this report can be reviewed at the following web address: http://www.pssg.gov.bc.ca/coroners/publications/docs/death-review-panel-aviation.pdf.

The coroner’s report discusses one accident involving a DHC-2, "Beaver" aeroplane where the seat and restraint system installation failed.

The aeroplane’s collision with water caused the pilot's seat to sustain a structural failure, which rendered the seat-belt restraint system ineffective, thus contributing to the pilot’s injuries. Consequently, Transport Canada Civil Aviation (TCCA) requested that the aeroplane Type Certificate Holder (TCH), Viking Air Limited, conduct a review of the seat assembly as installed in the accident aeroplane to determine if there was a structural integrity issue.

The former TCH, DeHaviland Canada Ltd., issued a relevant Service Bulletin (SB) 2/39, dated August 31, 1984. The SB notified owners of accident/incident reports that have revealed the use of unapproved seat configurations. SB 2/39 identifies a list of checks to be accomplished relevant to the seat installations.

The attached figure is a similar seat to that of the accident aeroplane. This configuration is not approved. 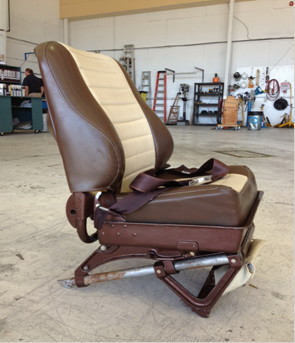 Defects, malfunctions and failures occurring on aeronautical products are to be reported to Transport Canada, Continuing Airworthiness in accordance with CAR 521 mandatory Service Difficulty Reporting requirements.

Note:
For the electronic version of this document, please consult the following Web address www.tc.gc.ca/civil-aviation-safety-alert