This advisory information provides guidance material for acceptable means, but not the only means, of demonstrating compliance with the requirements of Subpart 303 of the Canadian Aviation Regulations (CARs), dealing with Aircraft Fire Fighting (AFF). It also contains supplemental guidance information related to the subject.

The following terms may be used by fire-fighters while conducting Aircraft Fire Fighting (AFF) services.

"Assigned position” means the location where the  vehicles and staff are normally stationed during flight operations, which is normally the fire station.

343.04  Hours of Operation of an Aircraft Fire-fighting Service

The following methodology should be applied by the airports for the annual testing of the Aircraft Fire Fighting equipment that dispense the complementary agent required for systems used to meet complementary agents requirements stipulated in Section 303.09 of the CARs.

The following terms may be used during the course of training:
“Incident Commander” means the individual responsible for the management of all incident operations.

“Size-up” means a systematic process consisting of the rapid, yet deliberate, consideration of all critical fire ground factors and leads to the development of a rational attack plan based on these factors.

“Strategy” means the general overall approach of the operation and drives that attack plan.

“Strategic Plan (Defensive)” means a plan used when fire conditions prevent an interior attack.  i.e. - large exterior fire streams will be placed between the fire and the exposures to prevent fire extension.

“Strategic Plan (Offensive)” means a plan used when fire conditions will allow an interior attack.  i.e. - hand lines are extended into the fire area to support the primary search and to control the fire.

“Tactical Priorities” means the objectives that should govern action on the fire ground which are egress assistance, fire control, and property conservation.
(amended 2000/06/01)

(2)Level of Achievement to be Attained

(J) Standard hand signals used to communicate information to an aircraft in a situation of emergency in the event of a discreet radio frequency failure.
(amended 2001/06/01) 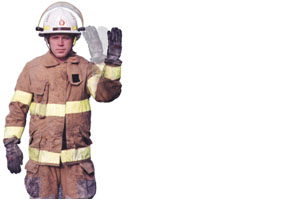 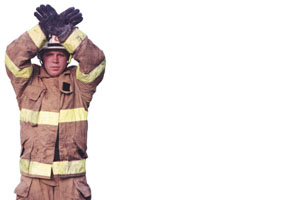 Arms in front of head crossed at wrists
Night: Same with wands 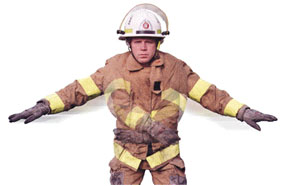 In addition to the ongoing training record requirements individual firefighter records should contain proof of all of the essential training received. This should be in the form of:

Response time is considered to be the time between the initial call to the , and the time when the first vehicle(s) is/are at the selected location to apply fire-fighting agents at a rate of at least 50% of the discharge rate specified in CAR 303.09.

Any other  vehicle which is employed to meet the total requirement, capacity and discharge, should arrive to the selected location no more than one minute after the first responding vehicle to apply the quantities of fire-fighting agents at the required discharge rates specified in CAR 303.09. If the response test does not include all  vehicles as a minimum, the other  vehicle(s) discharge and operating capabilities should be tested and recorded to fully satisfy the requirement of paragraph 303.18.(4)(b).