This paper summarizes the methods and results from a testing program that was conducted to experimentally investigate the thermal conditions to which a 1/10th-scale representation of a tank car was exposed when it was engulfed in pool fires fueled by heptane, Bakken crude oil and diluted bitumen (dilbit) crude oil. The tank car was simulated using a cylinder that did not contain any lading, but was instead instrumented such that the total heat flux from the surrounding flames could be measured at various locations along its outer surface. The results of the pool fire tests are described in detail in the test report [Ko, et al. 2020].

As the transportation of flammable liquids, including crude oil, in rail tank cars has increased in recent years, so has the interest in better understanding the response of the tank cars to potential accident consequences, such as fire conditions. The tank car contents can be a source of flammable fuel, which may spill and ignite in an accident. When a tank car is heated by fire, it can fail violently (e.g. heat-induced tears or boiling liquid expanding vapor explosions (BLEVEs)). It is essential to understand the fire environment around the tank car when assessing the hazard to the tank car, the performance of its safety mechanisms (e.g. pressure relief device), and the behaviour of its contents.

The focus of the present experimental study was to experimentally characterize, at reduced scale, the thermal environment surrounding tank cars engulfed in crude oil pool fires fueled by different crude oil types. The fully engulfed condition was selected as it represents a worst-case scenario in terms of potential hazard to the tank car.

A cylindrical calorimeter designed to simulate a 1/10th scale tank car was placed above a 2-m diameter pool fire (see Figure 1). The calorimeter was instrumented to measure the total heat flux at various locations along its surface and around its circumference. Detailed description of the calorimeter instrumentation is provided in [Ko, et al. 2019].

Two different kinds of crude oil were tested: Bakken crude oil, which contains higher concentrations of dissolved gases and light-end, volatile hydrocarbons, and dilbit crude oil, which is among the heaviest varieties of crude oil transported in Canada. Heptane was also tested to provide baseline data against which the Bakken and dilbit test results could be compared.

The crude oils used in the testing program were specially handled to ensure minimal change in composition over the course of the testing program, from initial oil collection to transport to the test site to filling of the fuel pan. This was done so that the fire tests would capture the burning characteristics of all components in the crude oil, including the light ends. A parallel study to characterize the crude oil properties was conducted in part to complement the fire testing data and enable potential correlation of the fire behaviour with fuel properties. The assessment of those potential correlations are outside the scope of this study.

The study also investigated effects of the presence and placement of the calorimeter at different heights above the fuel surface, different fuel supply temperatures, and different methods of feeding the fuel to the pan (allowing the fuel to burn down versus maintaining a constant fuel depth) on the fire characteristics. 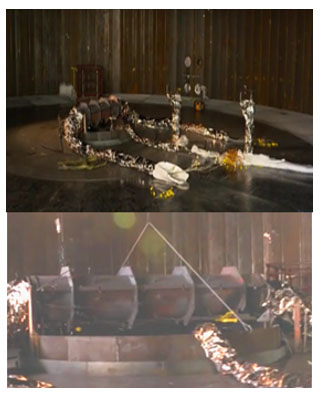 The fuel characteristics were reflected in the burning behaviour of each fuel. Unlike Bakken crude oil and heptane pool fires, the dilbit crude oil displayed unsteady burning behaviour due to the significantly large amount of heavy ends, which potentially caused substantial component distillation and gradual vaporization and pyrolysis of the heavy ends.

The average HRR (measured using oxygen consumption calorimetry) in the tests with the calorimeter placed 1 m above the pool was 3.2-3.8 MW for Bakken crude oil and 4.4-5.4 MW for heptane. An average HRR of 3.7 MW was measured (also using oxygen consumption calorimetry) in the dilbit fire test without the calorimeter; however, due to the highly variable burning behaviour of the dilbit crude oil fires, the average HRRs estimated using the measured mass burning rate indicated large uncertainty, preventing feasible comparison of the dilbit HRR results with the Bakken and heptane data. 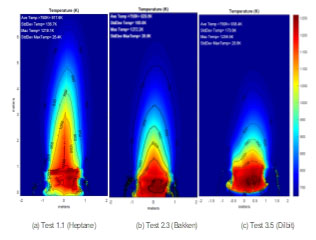 As shown in Figure 2, the measured flame temperature and SEP are higher in the lower part of the fire, and the values gradually decrease along the height of the flame. The maximum measured SEP was approximately 180, 200 and 190 kW/m2 for heptane, Bakken and dilbit crude oil fires, respectively. The heptane fires displayed the highest HRR, but the lowest maximum SEP.

There was no significant effect of the fuel supply temperature or the method of feeding the fuel to the pan (i.e. allowing the fuel to burn down versus maintaining a constant fuel depth) on the averaged measured values. The higher fuel supply temperature increased the burn rate by about 10% for the heptane and Bakken crude oil tests. Allowing the fuel to burn down, rather than maintaining a constant fuel level, resulted in minimal effect on average values of the mass burning rate and general fire characteristics of the Bakken crude oil pool fires. For the dilbit crude oil, the fuel compositional effect on the burning behaviour was observed in both continuous and non-continuous fuel feeding. The non-uniform burning behaviour became easier to discern when there was no continuous fuel feed into the fuel pan. Due to the non-steady burning behaviour, the impact of the calorimeter presence was difficult to be captured for the dilbit crude oil fires, while for the Bakken tests, the mass burning rate was reduced by 10-15% when the calorimeter was placed over the pool.

Detailed analysis of the test data obtained from the testing program will be conducted to increase insight into the thermal exposure of the calorimeter engulfed in fire. The time-variant burning behaviour displayed by the dilbit crude oil will be further analyzed to understand the burning behaviour of this multi-component fuel displaying non-uniform vaporization processes. Also, the test data will be compared with other test data already published to identify potential differences in fire behaviour between various crude oils and other hydrocarbon fuels.

The reduced-scale data obtained from the testing program would need to be scaled up to a real fire scenario involving the actual size of a rail tank car, various sizes of spill fires and the impact of wind. Numerical simulations are planned to help extrapolation of the test data beyond the scale and condition experimented in the testing program. Technical feasibilities of numerical modelling of the crude oil fires was explored and reported in [Gomaa, et al. 2019]. Numerical simulation can likely provide reasonable indication of the probable fire behaviour at much lower cost and risk than real-scale tank car fire testing.

This project was funded by Transport Canada, and the fire tests were conducted by Sandia National Laboratories. Additional support was provided for the Crude Oil Characterization Research Study by the U.S. Department of Energy, U.S. Department of Transportation.

To obtain a copy of the report, please contact us: