A 5.1 Notes on the Use of Free Surface Moments

Provided a tank is completely filled with liquid no movement of the liquid is possible and the effect on the ship's stability is precisely the same as if the tank contained solid material.

Immediately a quantity of liquid is withdrawn from the tank the situation changes completely and the stability of the ship is adversely affected by what is known as the "free surface effects". This adverse effect on the stability is referred to as a "loss in GM " or as a "virtual rise in VCG " and is calculated as follows:

Loss in GM due to Free Surface Effects: 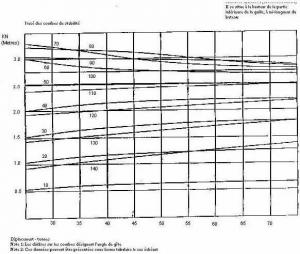 A 5.4 Notes on the use of KN Cross Curves

KN curves for displacements of 25 to 75 tonnes are presented for angles of heel at intervals between 10 and 140 degrees. The hull, main deck and enclosed deckhouses (see Figure 4 below) are assurned watertight at all angles of heel1.

To obtain righting arm ( GZ ) curves at a given displacement, the following equation should be used:

This enables the value of GZ to be calculated at each of the heel angles presented, and subsequently plotted as in the loading conditions presented herein.

*One pendulum acceptable for vessels less than 24 m

Items to be removed to calculate Lightship

Items to be added to calculate Lightship

A 5.6 Beaufort Scale of Wind Speeds and Corresponding Pressures

A 5.8 Notes for Consultants on the Derivation of the Maximum Steady Heel Angle to Prevent Downflooding in Gusts

5.9 Notes for Consultants on the Derivation of Curves of Maximum Steady Heel Angle to Prevent Downfloowing in Squalls

The wind heeling moment is proportional to the wind pressure, and to the apparent wind speed squared. It is also dependent upon the area, height, shape and camber of the sails, the apparent wind direction and the prevailing wind gradient. As a sailing vessel heels the wind heeling moment decreases and at any heel angle (Θ ) between 0 (upright) and 90 degrees it is related to the upright value by the function: HMO = HMΘ cos 1..3 Θ where HMO is the heeling moment when upright.

The heel angle of a sailing vessel corresponds to the intersection of the heeling arm ( HA ) curve with the righting arm ( GZ ) curve, where HA = HM/Displacement.

When subjected to a gust or squall the vessel heels to a greater angle where the heeling arm curve corresponding to the gust wind speed intersects the GZ curve.

In this example, which is illustrated in the diagram,

These values correspond to a point on the 45 knot squall curve on page lo. which was derived from a series of such calculations using different steady heel angles. Similarly the curves for other squall speeds were derived using different values for Vl .

These calculations should be performed for both loading conditions and the results corresponding to the worst case ( i.e. the lowest maximum steady heel angles) presented in the booklet.