Get the facts on oil tanker safety in Canada

Canada has the longest coastline in the world at over 243,000 kilometres. It is vital to protect our waters and communities from ship-source pollution because:

Read more information on this page about tanker safety.

For a quick overview, read the brochure World-Class Tanker Safety or view: 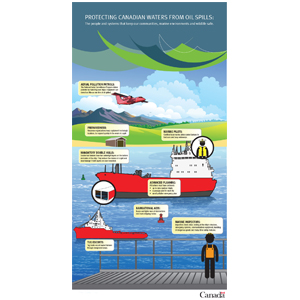 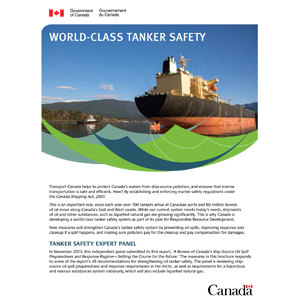 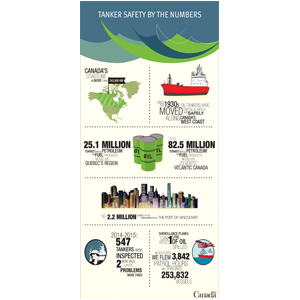 The largest oil spill in Canada occurred off the East Coast in 1970. The tanker M/T Arrow spilled over 10,000 tonnes of oil off Nova Scotia. This is about one quarter the amount spilled in US waters by the Exxon Valdez in 1989.

The West Coast's largest spill was 240 tonnes, caused by the sinking of the ferry M/V The Queen of the North in 2006. In 1988, the Nestucca oil barge spilled 87 tonnes of oil off the west coast of Vancouver Island.

In 2015, the M/V Marathassa was reported to have spilled fuel oil in Vancouver's English Bay. Read the independent review for more information.

Tanker statistics on the East Coast

In Quebec, 25 million tonnes of crude oil and various petroleum products are moved in and out of 39 ports where cargo is loaded or unloaded.

Eighty-nine per cent of the shipments of crude oil and various petroleum products are through Quebec City and Montreal.

Tanker statistics on the West Coast

Oil tankers have been moving along Canada's West Coast since the 1930s.

Oil is moved mostly via the following ports:

Much of the oil shipped out of Vancouver is transported to and from communities on the B.C. coast. Oil is carried by barges, container ships, ferries, and other types of commercial and private vessels.

Tanker statistics on the Arctic Coast

However, an increase is expected in the number of tankers transiting Arctic waters in the next few decades.

In 2015, eleven regulated vessels shipped product within the Arctic. Most of these were Canadian vessels.

Vessels must follow specific rules for Arctic shipping, which are designed to ensure safe operations in northern weather conditions.

Tanker statistics in the Saint Lawrence Seaway and Great Lakes

Over 4.1 million tonnes of oil products are moved from 29 marine facilities in and out of ports in the Great Lakes – St. Lawrence Seaway. Of this: