Since the 1970s, the number of ship-source oil spills and the volume of oil released during these spills has decreased by 95%, thanks to marine safety improvements. However even with a lower risk, we’re still improving the way compensation is provided for damage caused by oil spills.

Eligible claims, including environmental remediation, are now 100% compensable no matter the size of the spill.

Tell us what you think about this page!

Who pays for an oil spill in Canadian waters?

Video transcript - Marine Safety 101: Who pays for an oil spill in Canadian waters?

Sources of compensation for ship-source oil spills in Canada 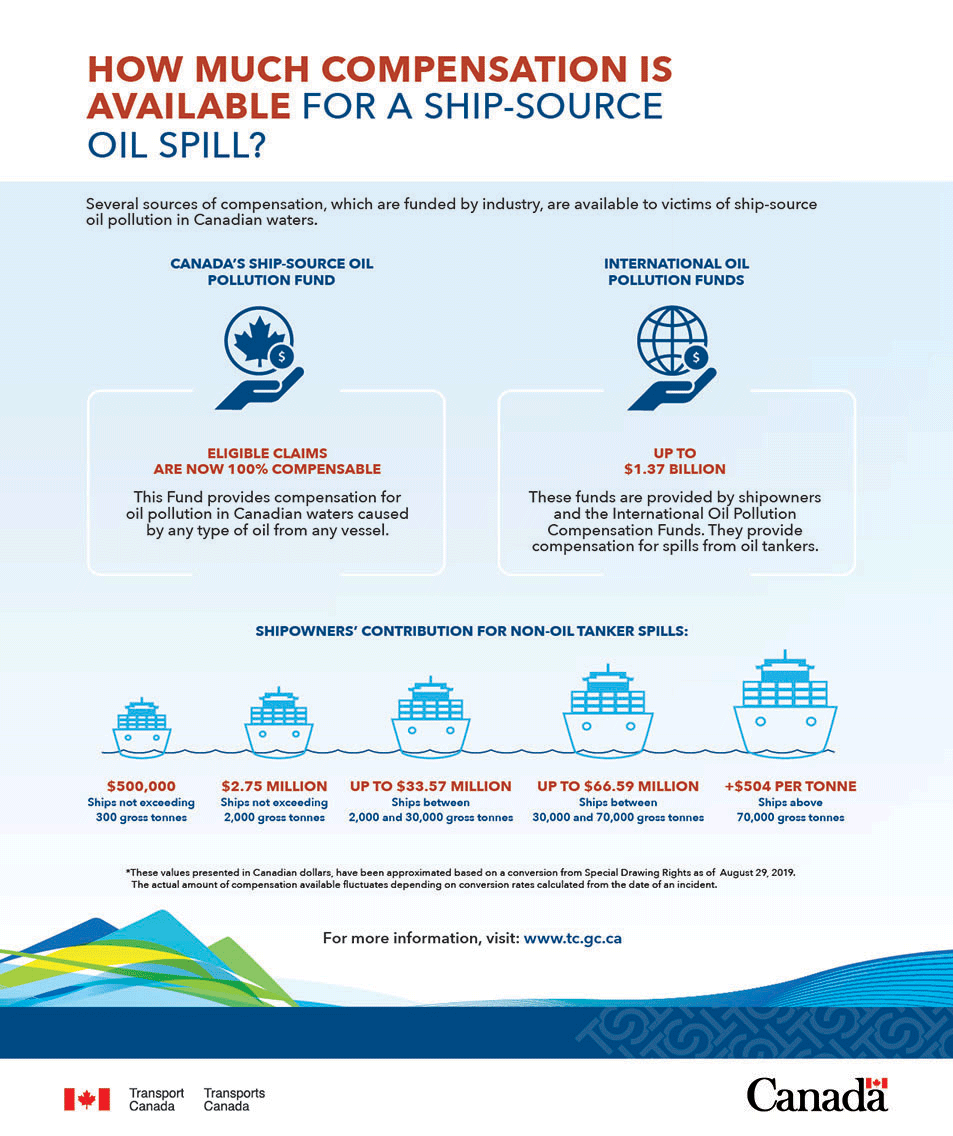 Liability and compensation for ship-source oil pollution in Canada is based on international conventions developed by the International Maritime Organization which make sure the polluter pays.

Polluters are financially responsible, even if the spill is accidental. The system is not based on penalties or criminal charges. If a shipowner’s insurance doesn’t cover the full costs of pollution, there are also international and domestic funds available, which are financed by the oil industry.

If a shipowner’s oil tanker spilled its cargo in Canadian waters, they would be liable for up to $162 million depending on the size of their ship.Footnote * If the costs of the spill were more than the shipowner’s limit of liability, additional compensation could be paid by international funds financed by industry and distributed by the International Oil Pollution Compensation Funds (IOPC Funds). A total of $1.37 billion is available from shipowners and the IOPC Funds.Footnote *

Even in smaller incidents, like when a ship spills the fuel it uses to propel itself, the shipowner is liable up to a limit that is based on the ship’s size. The larger the ship, the higher the limit of liability. For example, a shipowner is liable to provide compensation of up to $500,000 for ships not exceeding 300 gross tonnes, and over $66.9 million for ships larger than 70,000 gross tonnes.Footnote *

Once a claim is assessed and paid, the Administrator of the SOPF is required to take all reasonable steps to recover compensation from the polluter. These recovered amounts go back into the SOPF’s accounts and help make sure that industry-funded compensation is available in the event of future spills. There are no costs or fees to submit a claim directly to the SOPF.

How should claims be submitted?

To be entitled to compensation, you must provide:

You should present your claims with supporting documentation like:

It’s important that the documentation is complete and accurate in order for the claim to be processed.

How can I submit a claim?

For more information on how to submit a claim, please visit the Ship-source Oil Pollution Fund’s website or visit our webpage on how to get compensation for a ship-source spill.

You should submit your claim as soon as you know your total costs after an incident. The SOPF will accept eligible claims up to two years from the date of the pollution damage, but no more than five years after the date of the incident.

The SOPF has a new, faster process where claims less than $35,000 submitted within one year of damage can be paid within 60 days. Documentation isn’t needed when submitting the claim, but once compensation has been paid, you may need to provide supporting documentation for your claim up to three years after the date of the oil pollution damage.

What is eligible for compensation? 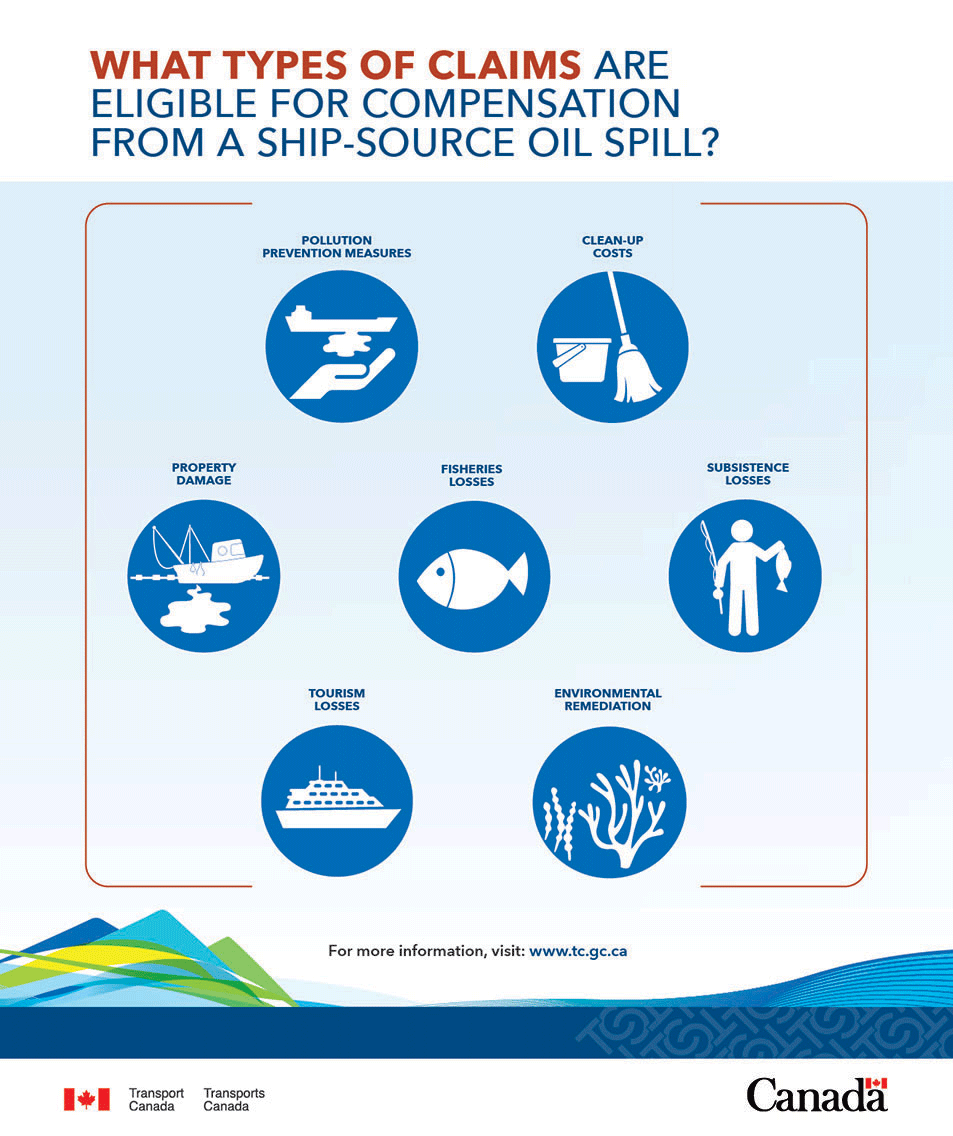 The following types of loss or damage are accepted:

Compensation is available for expenses for preventive measures even if no oil pollution occurs, as long as there was a serious and imminent threat of oil pollution damage. Any reasonable steps taken after an incident to prevent or minimize pollution damage are also eligible.

Example: A ship grounds, its hull cracks and trained responders from a local First Nation deploy a boom to prevent pollution.

Compensation can help recoup the cost of reasonable clean-up measures.

Example: If wildlife is oiled in a spill, reasonable costs associated with the cleaning and rehabilitation of the animals, such as birds, mammals and reptiles, are accepted.

Compensation is available for reasonable costs of cleaning, repairing or replacing property that has been contaminated by oil.

Example: If ship-source oil pollution has contaminated fishing gear, compensation is available for cleaning or repairing the equipment.

You can submit a claim for the loss of profit related to commercial and recreational fisheries, aquaculture and fish processing sectors.

Example: If a fishery closes, a licensed commercial fishery can claim their loss of revenue.

The local tourism industry can submit a claim for their loss of profit, if the loss was caused by ship-source oil pollution.

Example: Ship-source oil pollution contaminates the beach nearest to a hotel and for that reason its normal vacancy rate is affected. Hotel owners can make a claim for that loss.

Compensation is available to cover the costs of reasonable environmental reinstatement work, which could include post-spill studies like an assessment of environmental impacts, aimed at speeding up the natural recovery process.

Example: The cost of a study to establish the extent of environmental damage to decide whether remediation measures are necessary and feasible.

What Types of Claims are Eligible for Compensation for Ship-source Oil Spills in Canada
(PDF, 274 KB)

The ability to harvest fish and other aquatic species for food, social or ceremonial purposes is important to the culture of many Indigenous people in Canada. If an Indigenous group or person can’t access the resources they need for food, social and ceremonial purposes because of ship-source oil pollution, they may submit a claim for compensation.

The goal of the Marine Liability Act is to restore the lives of claimants to pre-spill standard and does not prevent or limit claims related to Aboriginal fishing losses.

For example, if a fishery is closed because of a ship-source oil spill, Indigenous groups with Communal Fishing Licenses can claim for costs of getting fish for food, social or ceremonial purposes. This would include:

In some cases, the Ship-source Oil Pollution Fund can provide compensation ahead of losses that haven’t occurred, but will most certainly occur. For example, if someone usually fishes for themselves or their family, but can’t safely fish because of a ship-source spill, they may submit a claim to the SOPF for future losses. This lets the people affected by ship-source oil pollution buy the fish and resources they need to replace what they can’t catch themselves.

Claims for compensation need to be made within the timeframes set out in the Marine Liability Act and documentation needs to be provided to show what expenses have been reasonably incurred because of a pollution incident.

If you need more information or have any questions, please contact us: MarineLiability-ResponsabiliteMaritime@tc.gc.ca.

Liability is dependent ship’s size and whether the oil is bunker fuel or cargo. Values presented in Canadian dollars, have been approximated based on a conversion from Special Drawing Rights as of August 29th, 2019. The actual amount of compensation available fluctuates depending on conversion rates which would be calculated as of the date of an incident.