Geographic distribution
All of Canada

Diono ULC Canada and Transport Canada wish to inform the public of an error on a French label affixed to certain Radian R100 restraints, model number C16600, which were manufactured between March 2011 and January 2012.  The affected label indicates the incorrect weight range in kilograms.  While the English label states that the seat is intended to be used forward facing for children weighing between 10 and 45 kg (22 and 100 lbs), the range on the French label states between 10 and 54 kg.  It should be noted however that the imperial weight range is correct on the French label - stating 22 to 100 lbs. 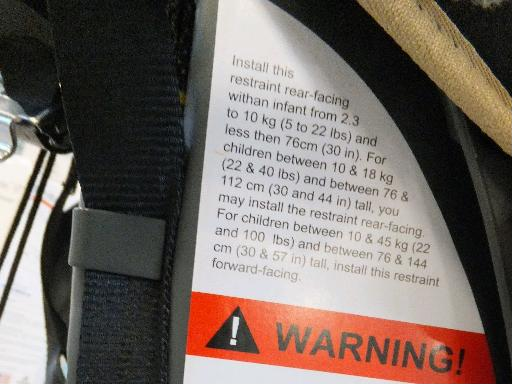 This issue could impact occupants if a French-speaking consumer reads only the weight guidelines on this label in kg, ignoring the weight rating on this label in pounds as well as the other weight references on the packaging and in the instruction manual, and the equivalent English label on the product itself.  If this were to occur, the consumer may inadvertently use the restraint system for a child with a weight greater than 45 kg (100lbs).

Transport Canada’s compliance program discovered the defect in the French label, and informed the manufacturer.

Diono has put into production corrected labels that will be made available to all affected consumers.

All registered owners with affected car seats will be sent a letter indicating how to obtain a free label replacement kit.  Non-registered owners, or owners who have moved, are asked to contact Diono at 1-866-954-9786 to receive, free of charge, a repair kit consisting of new warning labels that can be applied on top of the existing labels. The affected car seats should not be returned to the retailer.