Dorel Distribution Canada and Transport Canada wish to inform the public of a potential problem with the Maxi-Cosi Mico infant seat base. In a small number of cases, it has been found that, when the seat is installed onto the removable base, the seat will latch into the base, but it may not always fully lock. When the seat is latched but not locked, the base release handle is not completely retracted.

There is a potential that the seat could separate from the base in the event of a collision if the seat is not locked into the base. However, there have been no consumer reports of separation or injury to date.

The issue was first identified through Transport Canada research testing where a seat released from its base during a vehicle crash test. Further investigative work found that, in some instances, the base release handle would not always return to the fully locked position. However, it has been noted that, if one pulls on the seat to check for appropriate installation, as instructed by the manufacturer, the locking mechanism normally falls into place.

During the investigation, it was noted that the manufacturer had made design changes that influence the operation of the base locking mechanism in subsequent models of the Maxi-Cosi Mico base sold in Canada. Dorel Distribution Canada was informed of Transport Canada's findings and has cooperated with Transport Canada.

While Dorel Distribution Canada has not determined that the condition described is a "safety defect" within the meaning of the Motor Vehicle Safety Act, they are voluntarily conducting a public notice campaign as a result of Transport Canada's findings. Dorel Distribution Canada will voluntarily notify its customers of this campaign and will conform with Transport Canada's recall procedures. The company had redesigned the base unit and started using different springs after June 28, 2008. The new bases do not exhibit the non-locking situation.

All registered owners will receive a letter from Dorel Distribution Canada outlining the steps they should take to receive a repair kit. Non-registered consumers should contact Dorel Distribution Canada at their toll free number (1-877-657-9546) to receive, free of charge, a repair kit consisting of new springs and a tool to be used to change the springs. In addition, the company is supplying ease of use information with a label that can be affixed to the base.

Until the repair kit is received, Dorel Distribution Canada and Transport Canada have indicated that the public may continue to use the product. However, users must verify that the base release handle is fully retracted each time the seat is placed onto the base as depicted in the diagrams that follow. Consumers may visit Dorel Distribution Canada’s web site at www.djgusa.com to verify if their base is covered by this notice. Users should also follow the manufacturer’s installation instructions. 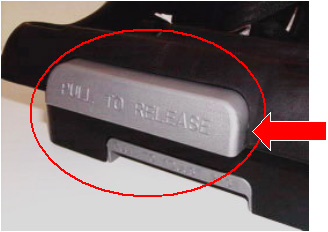 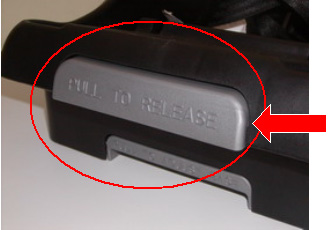 Handle Latched but NOT Fully Locked – Issue of Potential Concern