They are on our roads from September to June – yellow buses loaded with children. We see them at the busiest times of the day. Morning and afternoon, they ferry children to school and back home again. As drivers, when we see the flashing lights, we watch more carefully, and as parents we trust that our children are safe.

Safety Standards and Regulations
A school bus is a vehicle used mainly in Canada and the United States to transport large numbers of children safely to and from school. In Canada, the design of the vehicle is governed by approximately 40 federal regulations and by Canadian Standards Association standard D250. These requirements cover such things as the colour of the bus, interior and exterior body design, mirrors, lighting systems and seat design. In addition, provincial and territorial regulations, bus company rules and local school board policies apply to the operation of the vehicle, the bus routes and stops, requirements, if any, for attendants on the bus, hours of operation and licensing requirements for drivers.

A Good Safety Record
School buses are simply the safest way to transport children to school. The size and weight of the vehicle and the safety features designed into it offer substantial protection to bus occupants in a collision. Despite the large number of children transported and the distances travelled, serious injuries and fatalities are very rare. In fact, less than 0.02 per cent of all Canadian road deaths involve an occupant of a school bus.

Outside The Bus
The greatest risk to the safety of children is outside the bus, either from the bus itself or from the surrounding traffic. To address these dangers, buses are painted a distinctive shade of yellow to make them stand out. They have a set of warning lamps on the front and rear to indicate to drivers of other vehicles that the bus is stopped or stopping, and that children may be on the road. The bus also has a stop arm on the left-hand side to warn motorists that children are entering or leaving the bus and it is equipped with special mirrors. Many buses have a pedestrian crossing control arm so that children will cross far enough in front of the bus that the bus driver can see them.

The interior of the bus has also been designed to protect the occupants in case of a collision, there are no sharp objects and the roof is very strong. Each seating position is designed to protect the child without the use of a seatbelt. This system, called compartmentalization or passive protection, provides excellent protection to school-aged children without the use of seatbelts. Research is continuing to assess the effectiveness of compartmentalization.

Compartmentalization and Seat Belts
The key to compartmentalization is that the back of each seat is padded and is a specific distance from the seat behind it. If the bus comes to a sudden stop, the padded seat back absorbs the forward energy of the child seated behind. Without a seat belt, the child's body slides forward and hits the seat back in such a way as to distribute the force of the impact over the entire upper body. If a lap belt were used, the child's body might pivot on the belt, focusing the force of the blow onto the head and neck. And if the seat belt is not worn correctly (it should be worn low on the hips) the stomach or spine might be damaged.

Another type of seat belt is the three-point belt, also called the lap/shoulder belt. While this system is available, it would require structural design changes to the interior of many buses. However, safety is the main issue. Transport Canada has no evidence that three-point seat belts would improve the overall level of safety on a school bus. In addition, there are concerns that instead of wearing their belts, children might play with them, potentially injuring other children on the bus.

Pre-schoolers on School Buses
Young children present a different challenge. In recent years, pre-school-aged children are travelling more and more on school buses. Transport Canada has conducted tests to evaluate the safety implications of this trend.

Canadian and U.S. research suggests that appropriately installed infant or child restraints would improve occupant protection for small children. The research concluded that a child who weighs less than 18 kilograms (up to approximately age 4½) travelling in a school bus would be better protected if properly restrained in an appropriate child restraint.

Based on this study, Transport Canada recommends that children, under the age of about 4½ and weighing less than 18 kilograms, be transported in an appropriate child restraint system while on a school bus. The restraint system should be correctly attached, using a set of new lower anchorage attachments, with a properly installed tether strap. Care should be taken that the child's height, weight and age correspond to the child seat manufacturer's recommendation, which is attached to the seat. Children weighing 18 kilograms or more, who would be either in a booster seat or using a seat belt in a passenger car, are well protected by the normal compartmentalized seating in a school bus. 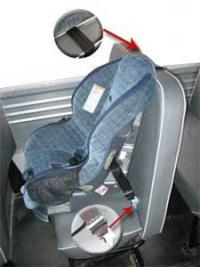 For more information, please see the Questions and Answers section.