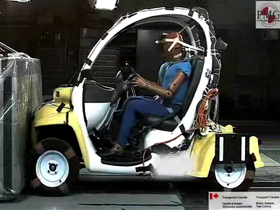 What are Low-Speed Vehicles?

Note: The LSV does not have the same legal status as a passenger car, which is a class that must meet a far greater number of safety standards. An electric passenger car must meet the standards required by the Motor Vehicle Safety Act (MVSA) that apply to all passenger cars.

On August 6, 2008, Transport Canada amended its regulations in order to:

The final amendment was published in the Canada Gazette Part II on August 6, 2008, and can be found at: http://www.gazette.gc.ca/rp-pr/p2/2014/2014-12-31/html/sor-dors307-eng.php. The proposed amendment was originally published in the Canada Gazette Part I on December 22, 2007, and the public was provided with the opportunity to comment on the proposed amendment, prior to the development of a final definition and amendment to the regulation.

Why do Low-Speed Vehicles Exist?

Low-Speed Vehicles (LSVs) were established as a separate class of vehicles by the U.S. Department of Transportation in 1998. They were originally designed for short shopping trips and social and recreational use within retirement or other planned, gated communities, especially in the Southern United States. In July 2000, the LSV class was created in Canada. Canada's LSV class was created to allow companies to make, import and sell these small, lightweight limited purpose vehicles that could not meet the safety standards applied to larger and heavier mainstream vehicles that operate on public roads.

Provinces and territories regulate vehicle licensing and have authority to determine the appropriate operating environments for LSV via their Highway Traffic Acts and similar legislation.

Transport Canada regulates the manufacture and importation of LSV to promote the safety of the travelling public and to reduce the risk of death, injury and damage to property and the environment. It does this by developing, updating and enforcing the Motor Vehicle Safety Regulations (MVSR), including the Canada Motor Vehicle Safety Standards (CMVSS). All new and imported vehicles sold in Canada must comply with the CMVSS that applied – at the time of manufacture. As is the case in the U.S., LSVs must be self-certified by the manufacturer. The Federal government does not have any statutory role in regulating road use, which is also the case in the U.S. However, the Federal government provides advice and recommendations regarding vehicles and their usage to Canadians.

While provinces and territories regulate public road use and vehicle and driver licensing, Transport Canada does not encourage the use of LSVs on public roads, since they since they are not required to provide the same level of safety as mainstream vehicles.

Canada's Motor Vehicle Safety Act (MVSA) regulates how vehicles are made and which vehicles can be imported. Why? To reduce the risk of death, injury and damage to property and the environment linked to vehicle use. To ensure a suitable level of safety, a passenger car maker has to design, manufacture and test for up to forty safety standards, whereas a LSV manufacturer is required to meet only three minimal safety requirements. This is far fewer than for any other vehicle class that is regulated under the MVSA. The full list of standards applicable to the various vehicle classes, including passenger cars and low-speed vehicles, may be found through the following link: http://laws-lois.justice.gc.ca/eng/regulations/c.r.c.%2c_c._1038/page-1.html

LSV safety standards in Canada correspond to their expected use and their top speed of 40 kilometres per hour. They must be electric and have headlights, turning lights, brake lights, rear-view mirrors, parking brakes, a windshield and seat belts.

Since the early 1970s, federal safety regulations have been instrumental in reducing the number of road injuries and deaths in Canada. While the number of vehicles on Canada ‘s roads has almost doubled, the number of traffic deaths has gone down from 6,706 in 1973 to 2,700 in 2007. That's a reduction of over 50 per cent!

Crashworthiness is the ability of a vehicle to protect its occupants during a crash. The body and frame of a mainstream passenger car are designed to shield the passengers from coming into direct contact with exterior objects, like other cars or poles for example, during a crash. Disruption or failure of the vehicle structure during a crash greatly increases the risk of serious injury.

The seat and seatbelt systems work together to protect vehicle passengers by bringing the passenger to a slow and controlled stop and keeping the passenger within the protective confines of his or her occupant space. Disruption or failure of seat belts, seat anchorages, or airbags during a crash greatly increases the risk of serious injury.

Mainstream electric vehicles are subject to safety performance standards such as occupant protection in frontal impacts, rollover protection, head restraints, side door strength and steering column rearward displacement, to name a few. In addition, there are requirements for child occupant restraint anchorages in order to ensure the safety of children. Because LSV were not originally intended for regular interaction with larger, heavier traffic, the LSV class of vehicles is not subject to these standards.

Vehicle crash dynamics are complex and the existing standards for passenger vehicles ensure a suitable level of occupant protection for vehicles in regular road use. Appropriate measures to manage the energy encountered during vehicle collisions must be designed into the vehicle by the manufacturer and are governed by the vehicle safety performance standards.

Low-speed vehicles are relatively new to the Canadian market, and few have been sold in Canada to date. As Canada is integrated within the North American economy and US road network, the government has been in contact with U.S. organizations including the United States Department of Transportation's National Highway Traffic Safety Administration, IIHS (Insurance Institute for Highway Safety), and AAMVA (American Association of Motor Vehicle Administrators) with the purpose of determining the safety record and performance of LSV in the United States. These organizations all noted the need to carefully control the road use of LSV to protect occupant safety. Nevertheless, they were not able to provide any data on the safety history of LSV or results of testing. As a result, the Canadian government undertook a safety assessment of various LSV including testing of their performance in the types of collisions that could occur on streets with low speed limits. The assessment confirmed that the LSV lacked many of the standard safety features that are common in passenger cars and would also pose significantly greater risks of death and serious injury to occupants, compared to fully safety certified vehicles.

Transport Canada has been unable to substantiate claims made by other parties regarding LSV safety history due to a lack of supporting documentation. The U.S. does not track statistics specifically for LSVs. These vehicles are instead included in the 'other' category, making it impossible to track actual numbers. It is worth noting that this 'other' category has had a steady fatality increase since 1998, when the vehicle class was created, while passenger car fatalities have decreased.

Transport Canada has purchased and will continue to purchase various low-speed vehicles to conduct safety and research crash tests. The tests represent collisions that typically happen on city streets where the speed limit is 50 km/h or lower. Transport Canada regularly conducts crash tests to monitor the safety of passenger vehicles. The crash tests are designed to evaluate the protection of occupants, and if that protection could be improved. The test results to date confirm that low-speed vehicles provide a substantially lower level of occupant protection than conventional passenger cars and that the injury risk in these vehicles is disproportionate to the severity of crash.

The Canadian transportation mix includes various classes of road users , such as passenger vehicles, trucks, buses, motorcycles, scooters, power assisted bicycles, bicycles and pedestrians. They interact with each other , resulting in a certain amount of risk to the occupant or pedestrian. Generally speaking a road user is aware of the risks associated with a chosen method of transportation (i.e., travel by motorcycle has higher risks than travel by car), and the various vehicle classes are easily distinguishable from one another. It is incumbent on manufacturers to apprise their customers of safety risks via labeling within the vehicle and cautions in owners manuals. It is also important that consumers shopping for vehicles ask the dealer about the safety features and safety risks and limitations associated with a vehicle before purchasing it.

It is important to note that many LSV makes are similar in appearance to regular mainstream passenger cars, and so their occupants and others interacting with such vehicles may not be aware of their reduced safety when compared to passenger cars. The results of a street collision would be different in each class of vehicle. Whereas an occupant in a mainstream passenger car would be reasonably protected by the car's safety cage, and a motorcycle driver and passenger with helmets might be ejected from the vehicle with attendant risks, a LSV occupant could be crushed inside the vehicle resulting from a collision.

In order to manage the risks associated with road user interaction, the Highway Traffic Acts set the conditions for road use and some classes of road users are in fact prohibited from certain roadways (eg. scooters are not allowed on highways). Operator training, age thresholds, and licensing requirements (eg. for cars, trucks, motorcycles) and operator protection (eg. helmets for cyclists and motorcyclists) take into account the tailored needs of various classes of vehicles.

Transport Canada and the provincial and territorial governments share concerns over the safety of vulnerable road users such as cyclists and pedestrians, on our roadways. Through the Canadian Council of Motor Transport Administrators (CCMTA) we are engaged in efforts to improve their safety under the Vulnerable Road Users Task Force. The two levels of government are likewise engaged in improving the safety of road networks via the Transportation Association of Canada. In addition, Transport Canada has been participating in the development of a Global Technical Regulation on pedestrian safety which is aimed at reducing death and injuries to pedestrians being struck by vehicles.

A focus on Safer, Cleaner Vehicles

While LSVs do not replace the need for electric or hybrid vehicles that meet the large number of safety standards for passenger vehicles and that are designed to drive on public roads with mainstream traffic, Transport Canada does recognize that LSVs produce zero tailpipe smog and greenhouse gas emissions and hence form part of a sustainable transportation mix. Transport Canada will continue to recommend to other levels of government and to consumers where and how LSVs can be the most useful, without putting the safety of Canadians at risk.

Transport Canada encourages vehicle manufacturers to consider designing and making electric vehicles that meet all of the safety standards met by mainstream motor vehicles, so they can offer the same level of protection, without tailpipe emissions or negative impact on local air quality.

Through the ecoTECHNOLOGY for vehicles ( eTV ) program and the Transportation Development Centre's projects, Transport Canada:

For more information on LSVs please: