The purpose of this Civil Aviation Safety Alert (CASA) is to raise awareness of a recent failure from stress corrosion cracking on a DHC-3 float landing gear and recommend actions to prevent further failures.

A DHC-3 operator recently found a front float strut with part number (P/N) C3UF108-6 to be fractured. The failure was discovered after completion of a flight. There were no injuries to crew or passengers and there was no other damage to the aeroplane. The failed part is depicted in Figure 1. 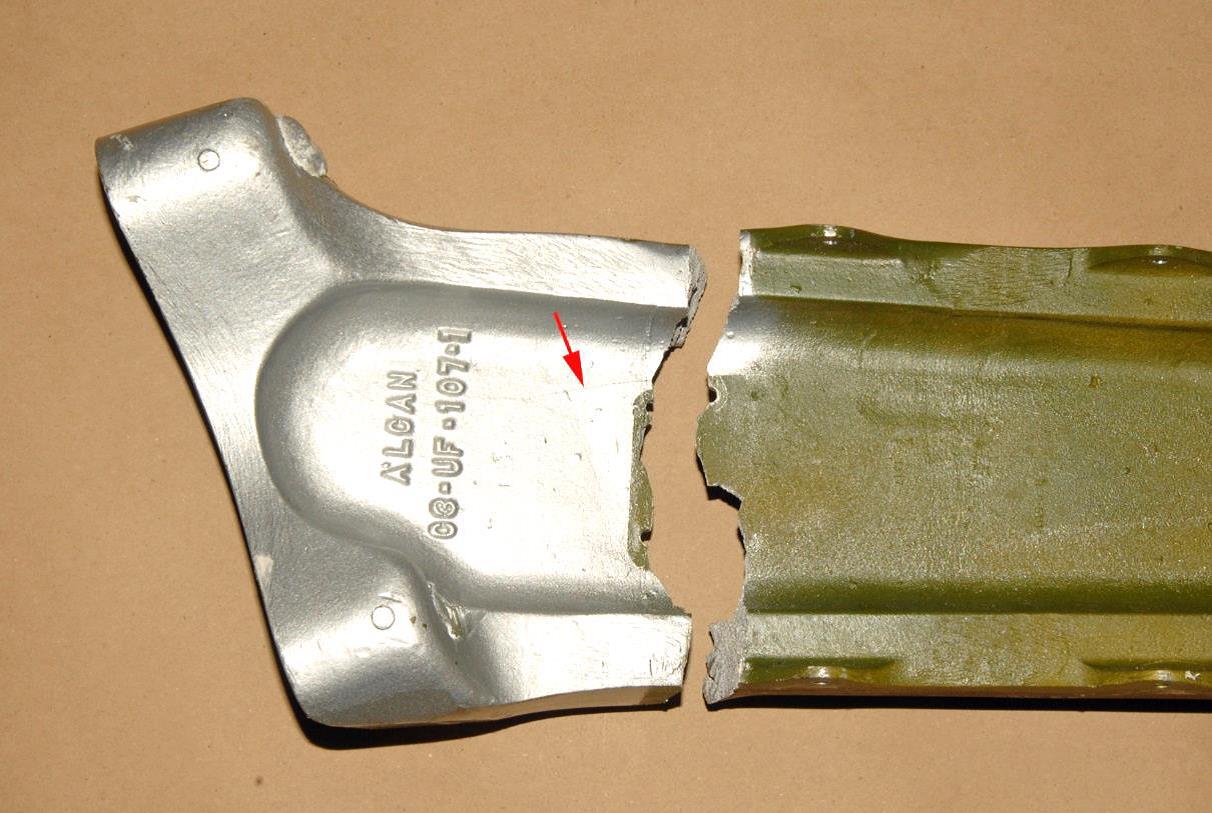 The front strut is a primary component of a float landing gear. Fracture of the part has the potential to cause a catastrophic accident.

Service history of the affected parts indicates that failure is unlikely to occur if sustained tensile stresses are avoided. This is the only known failure of this part family from stress corrosion cracking.

During the investigation of the failure, it was noted that the failed part was bent and twisted. This was apparent because at least two features of the part were found to be significantly outside of the allowable dimensional tolerances. It was also reported that some difficulty was encountered during the installation of the strut, two weeks before the accident. After the failure occurred, other right hand struts were fitted to the aircraft with no difficulty. This suggests that excessive fit-up forces were likely required to install the failed part. These excessive forces would produce sustained tensile stresses on the part, fulfilling the third condition required for stress corrosion cracking to occur, leading to the failure of the part.

There are alternatives to the front float strut P/Ns that are discussed above. These alternatives are manufactured from aluminum alloy plate material that is much less vulnerable to stress corrosion cracking than the cast aluminum material of the original parts. In addition, the alternative parts have protective finishes that are generally more effective at protecting the part from the environment than the finishes used on the failed part.

Transport Canada has issued Airworthiness Directive (AD) CF-2018-04 applicable to all DHC-3 aeroplanes. This AD requires recurring inspection of components that are likely to be adversely affected by corrosion, wear and fatigue cracking. The front float strut is one of the components that is required to be inspected by AD CF-2018-04.

Owners, operators and maintainers of DHC-3 aeroplanes operating on floats, are cautioned not to use excessive fit-up forces when installing front struts. If the part will not install easily it should be inspected for conformity to dimensional tolerances. If the part conforms, troubleshooting of the float installation should be performed to determine the root cause of the installation difficulties.

When purchasing new struts, consider the parts with Supplemental Type Certificate (STC), Parts Manufacturing Approval (PMA) or Part Design Approval (PDA) that are made from materials that are less vulnerable to stress corrosion cracking and that feature robust protective finishes as alternatives to the part numbers discussed previously in this document.

For more information concerning this issue, contact a Transport Canada Centre; or contact Ross McGowan, Continuing Airworthiness in Ottawa, by telephone at 1-888-663-3639, facsimile 613-996-9178 or e-mail cawwebfeedback@tc.gc.ca.