Transport Canada Civil Aviation (TCCA), through the Web Service Difficulty Reporting System, was made aware of three cases where the elevator cable assembly Part Number (P/N) 600-90020-125, located in the vertical stabilizer just above rib #4, was found rubbing against and had partially worn through the electrical conduit P/N 601-56004-41(LH).  Some of the electrical wires inside the conduit for the horizontal trim actuator (HTA) were damaged, but the HTA system was still operational. (See Appendix “A”)

The above defects were found while conducting the 180 and 240 months inspections. Maintenance records were researched but the cause of the cable/conduit interference could not be identified.

Bombardier Aerospace has revised the aircraft maintenance manual (AMM) and will publish an Advisory Wire (AW) addressed to all operators. The AW will emphasize the importance of cable inspections, especially in the vertical stabilizer.

TCCA recommends that maintenance personnel pay extra attention during the next scheduled cable inspection to ensure that the entire cable run is fully inspected as per the AMM. Confined areas that are difficult to gain access to warrant close examination to ensure adequate clearance exist to prevent interference.

Defects, malfunctions and failures occurring on aeronautical products should be reported to TCCA as per CAR 591 Service Difficulty Reporting requirements. For further information, contact a Transport Canada Center, or Mr. Guy Richard, Continuing Airworthiness, Ottawa at 613-952-4357, facsimile 613-996-9178, or email cawwebfeedback@tc.gc.ca. 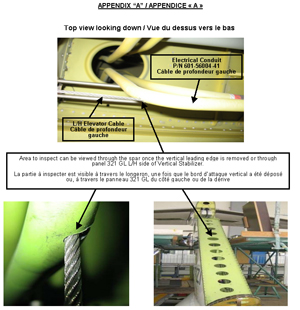