While  becoming airborne following a touch and go landing, the right rudder pedal of the Cessna 152 became jammed near the neutral position.  Aircraft directional control was lost and the aircraft veered to the left of the runway into packed snow and overturned.  The student pilot was uninjured, but the aircraft was substantially damaged.

Examination of the aircraft revealed that a washer within the right steering tube (photo 1) had become slightly deformed and had been pushed past the retaining crimp.  The steering tube assembly (Photo 2) interconnects the rudder bars to the lower section of the nose oleo to enable steering of the nose gear while on the ground. When the nose gear leaves the runway on take-off, the extension of the oleo causes the upper torque links to contact the upper strut.  The area of contact is flat and engineered so that, as the oleo extends, the nose wheel remains centered during flight. 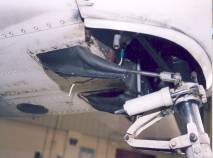 Rudder pedal movement for rudder control remains available by springs within the steering tubes.  On the ground, depressing one of the rudder pedals initially compresses the spring that in turn acts on the oleo's tie rod end to make the nose wheel turn.  Typically, if the aircraft is stopped on dry pavement, the springs cannot cause much movement to the wheel.

Once the aircraft is moving, the resistance is nullified and steering action via the spring / solid rod combination is hardly noticeable.  Photo 2 shows the steering tube as removed from the aircraft and photo 3 shows the areas of the annular crimp with half of the tube wall having been cut away and the washer in the normal position.

In this occurrence, the washer in the right hand (RH) tube was found on the aft side of the annular crimp (as seen in photo 4). While in that condition, the right rudder pedal could not be depressed when in flight and the spring imbalance between the steering tubes would cause a rudder deflection of 2 to 4 degrees to the left.  At slow speeds (high angle of attack) and with full power, the combined effects of rudder deflection, propeller effect and slipstream, can result in a left yaw that is difficult to overcome.

Photo 4 : Washer past the crimp as found

A defective steering tube would act as a solid rod when the aircraft is maneuvered on the ground. During the preflight rudder control check, any pedal movement would require a corresponding turn of the nose wheel instead of the typical smooth increase of force from the pedal as it compresses the spring.  On dry pavement, with the aircraft static, the force needed to push the pedal and simultaneously turn the nose wheel would be substantially higher.

Other Cessna models such as the 150, 172, and 175  use the same type steering tube.  There are more than 3000 aircraft (Cessna 150, Cessna 152, Cessna 172 and Cessna 175) registered in Canada using this type steering tube.  The steering tubes and their interior condition cannot be inspected as the components are crimped in place.  Presently the instructions for continuing airworthiness do not contain any reference to address the function of this component.

Transport Canada recommends maintainers and operators of these aircraft types to carry out further investigation when greater-than-normal rudder force is encountered.  A jammed rudder pedal can indicate a possible failed rudder steering rod.  Raising the nose of the aircraft until the strut is extended and applying rudder pedal deflection can confirm correct steering arm operation.

For further information regarding the technical aspects of this advisory please contact the Cessna aircraft corporation.

Note: For the electronic version of this document, please consult the following Web address: