A recent Service Difficulty Report (SDR) stated that during a routine inspection on a DHC 8-320 series aircraft; a maintenance engineer noticed that the LH nacelle inboard side skin upper panel (Part No. (P/N) 85410588) was significantly buckled. There were also two cracks in the skin panel, the larger of which extends four inches lengthwise.

A maintenance investigation revealed that the large oversized washer (P/N CSP192-96), which prevents the nacelle pin from migrating out of its respective lug had not been correctly installed. The lug is one of four, which attach the nacelle to the front and rear spar. The nacelle rear spar pin(s) are prevented from migrating by the shoulder of the pin on the aft side and by a large circumference washer (P/N CSP192-96) on the forward side. The actual bolt goes thru the centre of the nacelle pin. The nacelle pin is a safe life component that is replaced at intervals of 22770 Flight Cycles for Models 311, 314 and 315, and 42670 Flight Cycles for Model 301 and 80000 cycles for Models 100/200.

Maintenance personnel later found the subject nacelle pin and associated attaching hardware ‘not installed and placed’ in the upper longeron channel area of the nacelle assembly. The aircraft has suffered significant damage with gouging to the forward lug fitting (P/N 85410274) due to contact with a lower skin fastener. Additionally, a 20-inch horizontal crack was found in the drag angle (P/N 85712414). Furthermore, a Non-Destructive Testing (NDT) inspection revealed a cracked inboard upper longeron and side skin doubler. The migration of the nacelle pin caused significant damages to the adjacent aircraft structure. As a result, an extensive list of parts was replaced including nacelle frames, link and lug assemblies, fuselage side skin, longeron and longeron fitting. 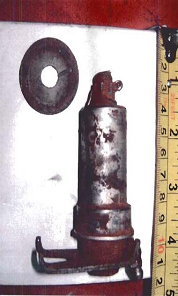 The pin (85410280) and associated attaching hardware and the washer (CSP192-96) are shown as removed from the nacelle internal structure. These were found in the upper longeron channel.

Bombardier Aerospace have recently published an article in their “In-Service Activities Report” (ISAR) publication no. 2009-01 (http://www.racs.bombardier.com/). Please note that this uniquely large washer is now referred to as a “retention” washer, which underlines the important purpose of this particular washer.

There is a current “C” Check Maintenance Task Card call for a General Visual Inspection (GVI) of this area. Transport Canada (TC) recommends that an inspection mirror and flashlight be used to verify that the “retention” washers have been properly installed. TC also highly recommends that owners/operators visually inspect all 4 nacelle pins for proper installation at the first available maintenance opportunity in this area. The migration of any of these nacelle pins could jeopardize the structural integrity of the nacelle to wing lug/spar attachment.

Note: For the electronic version of this document, please consult the following Web address: