Appearance at TRAN: Supplemental Mandate Letter and on the pre-entry testing requirements 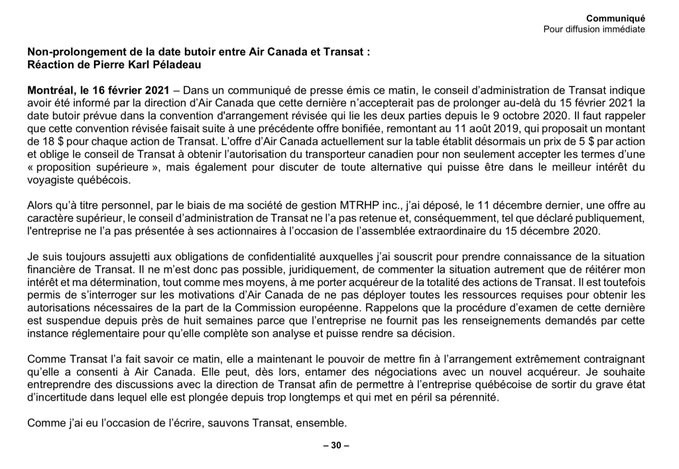 Deadline not extended between Air Canada and Transat:

Montréal, February 16, 2021 – In a press release issued this morning, Transat’s board of directors indicated having been informed by Air Canada leadership that Air Canada would not extend beyond February 15, 2021, the deadline set out in the revised arrangement agreement that had bound the two parties since October 9, 2020. It bears remembering that this revised agreement followed an earlier improved offer, dating back to August 11, 2019, which had proposed $18 per Transat share.  The Air Canada offer that is currently on the table now sets a price of $5 per share and requires Transat’s board of directors to obtain the Canadian carrier’s authorization not only to accept to the terms of a “superior offer,” but also to discuss any alternative that might be in the best interest of the Quebec tour operator.

On December 11, 2020, through my management company, Gestion MTRHP Inc., I personally made a superior offer; however, the Transat board of directors declined it, and consequently, as publicly stated, the company did not present my offer to its shareholders at the December 15, 2020, special meeting.

I am still subject to the confidentiality obligations to which I agreed in order to learn of Transat’s financial situation.  Therefore, I am not legally able to comment further on the situation, other than to reiterate that I have the interest and determination, as well as the means, to purchase all of Transat’s shares. One must question Air Canada’s motives in not using every resource necessary to gain the required approvals from the European Commission.  Let’s not forget that the latter’s review process has been on hold for nearly eight weeks now because the company has not provided the information requested by this regulatory body so that it can complete its analysis and render its decision.

As Transat has indicated this morning, it now has the power to put an end to the extremely constraining arrangement into which it had entered with Air Canada. It can now enter into negotiations with a new buyer. I hope to pursue discussions with Transat leadership in order to allow the Quebec company to get out of the serious state of uncertainty in which it has been for too long and which threatens its survival.

As I have written, let’s save Transat together.