The Government of Canada understands that modern and efficient seaports are essential to the operation of international trade. Through the National Marine Policy, the Government laid out a comprehensive program to change the policy and legislative framework for major elements of the transportation system that were government owned and operated. Under this policy, the federal government withdrew from the direct operation of many marine components, including ports. Key principles underpinning this exercise included the transfer of infrastructure costs to system users and beneficiaries and the commercialization of the management of federal ports.

In 1998, the Canada Marine Act set out the spirit and objectives of the National Marine Policy for federal ports. These ports, comprising the National Ports System, would operate under a new business and governance model as Canada Port Authorities (CPAs). A list of current CPAs is included in Annex A.

CPAs are federally incorporated, autonomous, non-share corporations that operate at arm’s length from the federal government, who is the sole shareholder. However, there is no directive power under the legislation that allows the federal government to direct or influence the actions of the respective CPAs. They are governed by a board of directors nominated by port user groups and various levels of government to implement “user pay-user say” principles within the port system. They operate according to business principles and have the authority and flexibility to determine strategic direction and make commercial decisions. CPAs are able to set their own fees (e.g., berthage and wharfage), but such fees must be fair and reasonable. CPAs are also responsible for the maintenance of commercial shipping channels and in this regard, finance their own dredging requirements. They also act as landlords, leasing out port operations to private terminal operators.

A key feature of CPAs is that by law they must be financially self-sufficient. CPAs finance their operations from their revenues and borrow from commercial banks for capital projects. They do not receive appropriations or funding from the government to meet operating costs or deficits. They do not receive federal government loans or any federal government guarantees of commercial loans. They cannot pledge federal real property as security for any borrowing, and they do not benefit from any interest free loan or bond issue status, nor have taxing powers.

***Prior to 2008 Amendments to Canada Marine Act, CPAs were not eligible for federal government funding. CPAs must demonstrate that they meet all required program criteria in order to access funding.

CPAs remit annually to the federal government a gross revenue charge which has resulted in total payments of over $CDN 119 million14 since they were established. As well, CPAs make annual payments to their respective local municipalities. These Payments in Lieu of Taxes (PILT) amounted to approximately $CDN 16 million in 201015.

CPAs can receive federal program payments under limited circumstances, specifically for emergencies and contributions in respect of the capital costs of infrastructure, environmental sustainability, and security. CPAs can participate in such funding programs and must meet identical eligibility requirements as other proponents, including the private sector. Thus, CPAs finance capital projects using their own revenues, partner with private sector stakeholders, borrow from a commercial lender, or as noted above, may apply for specific federal programs related to infrastructure, the environment, or security.

CPAs compete on many levels – with each other, with the large number of private operators and other public ports within Canada that together handle more than 45% of Canadian marine tonnage, and also with US and Mexican ports. This robust competition between ports supports both commercial discipline and choice for Canadian and US shippers.

The Government of Canada believes that this legislative framework and business model has established a solid foundation for the global competitiveness of Canadian ports, and serves as a model for other countries seeking to improve the operational efficiency of their port facilities. This model continues to provide efficient, competitive transportation choices for shippers.

There are many factors affecting the overall competiveness of a port. Some relate to natural advantages while others are operational or “man-made”. Natural advantages include the proximity to major markets and established global shipping routes such that goods do not have far to travel to reach their destination, and naturally deep harbours that do not require dredging and can accommodate increasingly large container vessels.

These natural advantages can be enhanced by supporting infrastructure. Among a CPA’s operational advantages are the efficiency and reliability of its operations, the size and state of its infrastructure assets (including multimodal/land-side connections), its ability to access or leverage capital to finance infrastructure investments, and its logistical agility to deal with unforeseen operational challenges that sometimes arise. Thus, it is the combination of both natural and operational advantages offered by Canadian ports that provide international shipping companies with competitive options on which to base business decisions and manage risk.

With respect to the operation of private railway companies, the Government of Canada’s role is to provide a regulatory and legislative framework that encourages these enterprises to provide safe, efficient, and effective service and undertake the necessary investments in their networks.

All Class 1 freight railways that operate in Canada, including Canadian National (CN) and Canadian Pacific (CP), are private entities that pursue business opportunities within a highly competitive North American marketplace. It is important to emphasize that rail rates established by both CN and CP, and all other private freight rail companies operating in Canada, are the result of market-based decisions by private entities. CN and CP are the only North American railways that have extensive networks in both Canada and the US. They are truly North American companies.

These rail companies are responsible for their own financial well-being, the efficiency of their operations, and the development, financing, and maintenance of their large rail networks. In 2011, CN and CP announced capital expenditure plans for their rail networks including investments of $CDN 1.7 billion and $CDN 1 billion respectively.16

Policies of deregulation and privatization of Canadian railways pursuant to the Government of Canada’s National Transportation Policy enabled Canadian railways to pursue business opportunities as private entities within the North American market. As a result of this liberalization of the sector, the railways have seen significant growth, expanding their business throughout Canada and the US to the benefit of both economies. For example, CN acquired Illinois Central railway in 1999 and Wisconsin Central railway in 2001, thereby expanding its network to reach into the southern US to the Gulf Coast. In 2007, CP bought the Dakota, Minnesota and Eastern railway, thereby extending its network into Wyoming and Kansas. 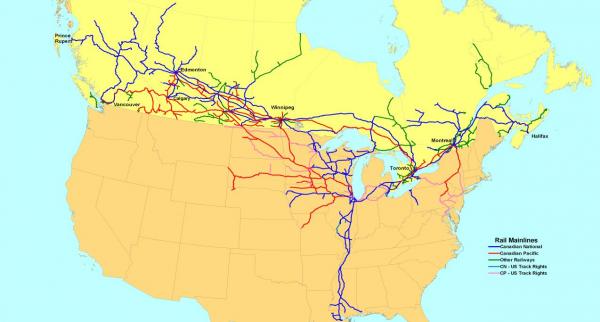 CN and CP now have extensive operations and infrastructure throughout the US and are important contributors to the economic prosperity and strategic transportation infrastructure of many US states. Taken together, CN and CP have a combined workforce of approximately 38,800, with nearly 30% (roughly 10,900) residing in the US.17

In addition, CN and CP operate as fully integrated private entities within North American supply chains, as demonstrated by extensive co-production agreements with US railways. For example, CN currently moves coal from Illinois to Tennessee on Norfolk-Southern railway tracks.

Through deregulation and privatization, Canadian railways have achieved impressive efficiency gains over the last two decades. A once financially distressed industry is now financially secure, profitable, and able to invest in the maintenance and expansion of its own infrastructure to better capitalize on the growing demands associated with the movement of containerized cargo. These investments, and the jobs and economic spin-offs they create, have a positive impact in both Canada and the US and facilitate the efficient movement of containerized and bulk cargo throughout North America.

Private investors have noted the successes of Canadian railways subsequent to their being deregulated and privatized, recognizing them as solid investments within the competitive North American marketplace. Indeed, the largest single shareholders in both CN and CP are US-based investors.

The Government of Canada supports ongoing collaborative efforts among stakeholders to improve supply chain efficiency and customer service. Specifically, railways, port authorities, terminal operators, and other stakeholders in the supply chain have signed several collaborative agreements to measure, monitor, and evaluate the performance of various supply chain partners. These agreements are designed to improve scheduling and end-to-end delivery time challenges, the movement of cargo, and to address operational disputes on a proactive basis. Such efforts continue to strengthen intermodal operations to the benefit of North American businesses and consumers.

[ Next: The Importance of Modern Transportation Infrastructure ]
[ Table of Contents ]