To access the Portable Document Format ( PDF ) version you must have a PDF reader installed. If you do not already have such a reader, there are numerous PDF readers available for free download or for purchase on the Internet:

This Memorandum of Understanding ("Memorandum") establishes a framework through which the Railway Association of Canada (RAC), its member companies listed in Appendix A, and Transport Canada will address emissions of criteria air contaminants (CAC) and greenhouse gases (GHG) from railway locomotives operated by Canadian railway companies in Canada.

2.0 Duration of the Memorandum

This Memorandum will come into force upon signing by the duly authorised representatives of the RAC and Transport Canada, and will endure until December 31, 2016 [2], unless it is terminated at an earlier date. The party that is terminating the Memorandum will give six months prior formal written notice to the other party.

Despite major growth in rail traffic, CAC emissions intensity, including, particulate matter, carbon monoxide, hydrocarbons, sulphur oxides and nitrogen oxides have been steadily decreasing. Further reductions in CAC emissions are expected to be achieved under this Memorandum, which builds upon the previous Memoranda referenced in Section 1.0.

In parallel to the signing of this Memorandum, Transport Canada is developing regulations to control CAC emissions under the Railway Safety Act. The proposed regulations would be aligned with United States regulations (Title 40 of the Code of Federal Regulations of the United States, Part 1033 [3]) and would apply to federal railway companies operating in Canada.

Until such time that new Canadian regulations to control CAC emissions are introduced, the RAC will encourage all of its members to continue to conform to United States emission standards (Title 40 of the Code of Federal Regulations of the United States, Part 1033).

For the duration of the Memorandum, the RAC will encourage all of its members to adopt operating practices aimed at reducing CAC emissions (i.e. nitrogen oxides, particulate matter, carbon monoxide, hydrocarbons and sulphur oxides).

As the new Canadian regulations will not apply to all RAC members (e.g. commuter railways), once these regulations take effect, the RAC will encourage all of its members to continue to conform to appropriate CAC emission standards for the duration of the Memorandum.

Transport Canada will undertake compliance promotion activities with affected stakeholders, including education and outreach related to the regulatory requirements.

Climate change is a major challenge for Canada's transportation sectors. The Government of Canada has committed to reducing Canada's total GHG emissions by 17 percent below 2005 levels by 2020. In 2010, the rail sector accounted for approximately 4 percent of total Canadian transportation GHG emissions [4] and transported about 71 percent of total Canadian surface freight [5] (i.e. tonne-kilometres reported for domestic traffic in Canada by rail and for-hire trucking carriers).

Under the previous Memorandum, 2010 GHG emissions intensity targets were met by Class I freight, regional and short lines and intercity passenger operations. Building on this, further reductions of GHG intensities are expected to be achieved under this Memorandum.

For the duration of the Memorandum, the RAC will encourage all of its members to make every effort to reduce the GHG emission intensity from railway operations.

The GHG emission targets, expressed as kilograms (kg) of carbon dioxide equivalent (CO2 eq.) per productivity unit, for the rail industry are:

Unlike the previous Memoranda, commuter railways will not be subject to a target, but will continue to report on their performance and efforts to reduce GHGs.

The RAC will prepare, in cooperation with its members, a GHG emission intensity reduction plan within six months of signing the Memorandum.

Research and development (R&D) work on new technologies and operational practices and the rail sector's ability to implement these innovations are important elements to consider in support of policy and regulatory development.

In coordination with the Railway Research Advisory Board, the RAC and Transport Canada will identify R&D activities that support this Memorandum. R&D activities will support a multi-year research agenda related to the reduction of emissions from the rail sector, which will inform future policy development.

The following sections outline the reporting and verification requirements for this Memorandum.

The RAC will prepare an annual report for each year of the agreement. This report will describe the performance under this Memorandum and will include:

The annual reports will also include detailed reporting on data, such as:

The Technical Review Committee (see section 7.2) will develop a detailed production schedule for the annual reports within six months of the signing of this Memorandum.

7.0 Management of the Memorandum

The following sections outline the governance structure for this Memorandum.

The Memorandum will be governed by a Management Committee comprised of senior officials from the parties to the Memorandum, Environment Canada and a representative of an environmental non-governmental organization. The Director General of Environmental Policy of Transport Canada and the Director General of Energy and Transportation of Environment Canada, or its delegates, will represent the federal government. The RAC and its member companies listed in Appendix A will be represented by the RAC's Chair of the Environment Committee, and its Vice-President, Operations and Regulatory Affairs, or their delegates.

The functions of the Management Committee will include, but not necessarily limited to, the following:

A Technical Review Committee supports the Management Committee and is responsible for the oversight of reporting and verification activities. The Technical Review Committee includes representatives from the RAC, Transport Canada, Environment Canada, CN, Canadian Pacific, VIA Rail Canada Inc., Metrolinx and a technical representative from the selected environmental non-governmental organization.

The functions of the Technical Review Committee will include, but not necessarily limited to, the following:

At its discretion, Transport Canada and the RAC may organize one or more workshops on emission reduction opportunities and environmental best practices in the railway industry. These workshops would be coordinated with the United States Environmental Protection Agency and the Association of American Railroads as appropriate.

Transport Canada will work with the RAC to address any barriers that may impede emission performance in the railway industry.

This Memorandum is a voluntary initiative that expresses in good faith the intentions of the Parties. It is not intended to create nor does it give rise to legal obligations of any kind whatsoever. As such, it is not enforceable by law. The government reserves the right to develop and implement regulatory or other measures it deems appropriate to achieve clean air and climate change goals. Nothing in this Memorandum will constrain the Parties from taking further actions relating to CAC and GHG emissions or fuel use that are authorized or required by law.

The parties recognize that the information provided pursuant to the Memorandum will be governed by the applicable legislation concerning protection and access to information. 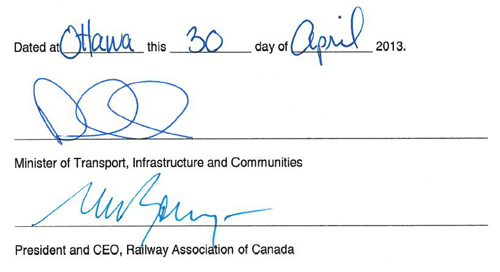 Signatures of the Minister of Transport Infrastructure and Communities and the President and CEO, Railway Association of Canada.

RAC MEMBER COMPANIE SPARTICIPATING IN THE MEMORANDUM
(As of April 30, 2013)

[1] This commitment was reaffirmed under the Cancun Agreements on December 11, 2010 in Cancun, Mexico at the 16th conference of the parties to the United Nations Climate Change Conference, which was initially agreed to under the Copenhagen Accord. (Return to footnote 1 source paragraph)

[2] The MOU covers performance from 2011 – 2015. Data collection processes typically begin 6 months after the calendar year ends and the final report is to be prepared by December 31 the following year. For example the data collection process for the 2015 report would begin in July 2016 and the final report would be prepared by December 31, 2016. (Return to footnote 2 source paragraph)