Climate Change and Its Impacts on Shipping

The temperature in the Arctic has risen, on average, 3-4 ° C over the past 50 years. The Arctic Climate Impact Assessment has found that this increase represented almost twice the rate of that of the rest of the world. With higher temperatures, recent summers have had record minimum amounts of sea ice. Over the past three decades, the annual average sea ice extent has declined by 3-4 % per decade, and also, ice thickness has been reduced by as much as 40 % for the thickest ice. Climate models predict that summer sea ice in the Arctic will decrease up to 80 % by 2100 as a result of climate change. Reduced sea ice is likely to facilitate an increase of marine traffic in the Arctic, and providing greater access to resources. 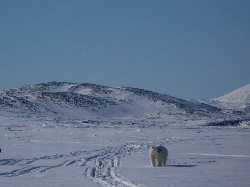 Even with significant warming in the Arctic, research predicts that Canada's Northwest Passage will remain difficult for large-scale commercial shipping. It also indicates that, under certain conditions, melting ice could make shipping in the Canadian Arctic more dangerous; not less.

With ice melting in the Arctic Archipelago, multi-year ice in the Arctic Ocean can flow into shipping lanes. Old ice is thicker and stronger, and may present serious navigational hazards that can cause greater damage to a ship’s hull as compared to first-year ice. This ice presents a hazard to most vessels.

EnviroZine, Environment Canada’s online newsmagazine, has more information on climate change in the Arctic and the Northwest Passage. The article Safe Northern Passage discusses the hazards of shipping in the Arctic caused by melting ice.