Emissions released by ship engines include nitrogen oxide, carbon dioxide, sulphur oxide, unburned hydrocarbon matter, carbon monoxide, and particulate matter. Other emissions include volatile organic compounds and ozone depleting substances such as halons or freons. Also of concern is the generation of ground-level ozone that results from photochemical reactions between nitrogen oxide and volatile organic compounds in the presence of sunlight.

Issues surrounding exhaust emissions have only recently come to the fore. The global shipping industry has begun to address this problem and is creating solutions. With regard to nitrogen oxide emissions, solutions may include engine retrofitting, exhaust gas recirculation, direct water injection, use of humid air motors, or use of combustion air saturation systems. It could also involve installation of selected catalytic reducers or water-fuel emulsifiers. Operational strategies such as reduction in ship speed or the use of shore power can also reduce nitrogen oxide output.

Air emissions from ships in Canadian waters are regulated under Division 6 of the Regulations for the Prevention of Pollution from Ships and for Dangerous Chemicals made under the authority of the Canada Shipping Act 2001. These regulations effectively implement Annex VI of MARPOL , which was adopted by IMO in 1997, and entered into force in May 2005. MARPOL Annex VI imposes controls on nitrogen oxide and sulphur oxide emissions as well as on ozone depleting substances. These standards currently apply only to new diesel engines, since all existing ships are ‘grandfathered’. 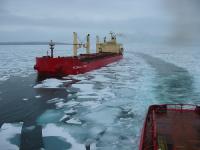