Report to Parliament, Marine Liability Act, Part 5: Liability for the carriage of goods by water

This Report to Parliament, made pursuant to Part 5 of the Marine Liability Act (MLA), considers whether the Hamburg Rules should replace the Hague-Visby Rules as Canada’s liability regime for cargo transported by the marine mode.

The Minister of Transport is required by Section 44 of the MLA to table this Report prior to January 1, 2020.

The MLA incorporates all of Canada’s marine liability regimes into one Act, including the liability of a marine carrier for loss of or damage to cargo. Canada’s law on marine cargo liability is based on an international convention known as the 1968 Hague-Visby Rules, though Canada never formally ratified them nor their predecessor, the 1924 Hague Rules. The Hague-Visby Rules establish the rights, duties and obligations of parties to certain contracts for the carriage of goods by sea including the carrier’s right to limit liability for damage to cargo sustained during the time it is physically aboard a ship.

However, the MLA also has provisions for the more recent Hamburg Rules to replace the Hague-Visby Rules, with a requirement that the Minister periodically consider such replacement and report that consideration to Parliament. Four such reports, in 1999, 2004, 2009, and 2014 have concluded that Canada should continue with the Hague-Visby Rules in order to retain consistency with most of its major trading partners.

III. Background to the Hamburg Rules

The Hamburg Rules were viewed by some nations, particularly nations like Canada that are primarily consumers rather than providers of shipping services, to be an improvement over the Hague-Visby Rules, because they:

A Transport Canada-funded study in 1982 also concluded that the Hamburg Rules were an improvement over the Hague-Visby Rules and that Canada should adopt them. This prompted a review of Canada’s law at the time, the Carriage of Goods by Water Act, 1936 which was based on the original 1924 Hague Rules.

In 1984, Transport Canada published a discussion paper recommending that Canada adopt the Hamburg Rules. While shippers favored this recommendation, ocean carriers, their insurers, cargo insurers and legal experts preferred the adoption of the Hague-Visby Rules. The ocean carriers suggested that the Hamburg Rules could increase shipping and litigation costs since established case law based on the Hague Rules would no longer be valid.

Further public consultations reached a consensus that Canada adopt a two-pronged approach by immediately implementing the Hague-Visby Rules with a provision to bring the Hamburg Rules into force when a sufficient number of Canada’s major trading partners have ratified them. This approach was incorporated into Part 5 of the MLA.

The Hamburg Rules entered into force in November 1992, 14 years after their adoption by the United Nations. To date, 34 states have ratified the Hamburg Rules, but Canada and other major trading nations have not acceded to them, nor implemented them fully in national legislation. The 14-year delay between adoption and entering into force highlights the reluctance of governments to adopt these rules.

Initial expectations were that the Hamburg Rules would be the new international regime that would achieve uniformity in the area of cargo liability. Unfortunately, the overall lack of support they received from the international community has resulted in their no longer being considered a viable replacement for the Hague-Visby Rules. This situation led a number of states, including Canada, to advocate for the development of a modern, technologically up-to-date Convention that would resolve the lack of uniformity.

The Comité Maritime International (CMI) undertook to prepare an initial draft of such an instrument which became the starting point in 2001 for an UNCITRAL Working Group on Transport Law that was tasked with formulating a new international convention on the carriage of goods by sea. In December 2008, the United Nations (UN) General Assembly adopted The Convention on Contracts for the International Carriage of Goods Wholly or Partly by Sea. The new Convention is much broader in scope than its three predecessors as it applies to all door-to-door cargo movements provided there is an international sea leg. Furthermore, its 96 articles (compared to just 10 articles for Hague-Visby and 34 articles for Hamburg Rules) cover a much wider range of topics and applies to a greater variety of maritime transport documents, including electronic documents, than either of its predecessors.

On September 23, 2009, this new convention was opened for signature at a special UN ceremony held in Rotterdam, the Netherlands and became known as the Rotterdam Rules. Sixteen states signed the Convention on that day and nine additional states have since signed them, all subject to ratification. If 20 of these 25 states follow through and ratify the Rotterdam Rules, these rules would come into force internationally.

Transport Canada consulted Canada’s marine transportation stakeholders extensively during the negotiation of the Rotterdam Rules: they were divided in their views as to whether Canada should sign and eventually ratify the Convention. Canada did not sign the new Convention, but Transport Canada advised stakeholders in 2009 that the Department would closely monitor international acceptance of the Rotterdam Rules, with the view of ensuring that our legislation on cargo liability remains consistent with the laws of our major trading partners.

To date, only four states (Congo, Spain, Togo and Cameroon) have ratified the Rotterdam Rules and there is little indication that other states will ratify them unless the United States proceeds to do so (which is not apparent). This is similar to the situation surrounding the Hamburg Rules where 21 states, including the United States and other major trading nations, signed them subject to ratification but never ratified them. Only 7 states that signed the Hamburg Rules eventually ratified them along with 27 nations that had not signed them.

The lack of a single, globally acceptable convention on marine cargo liability has encouraged a number of states to modernize their Hague-Visby Rules-based legislation (e.g., the United Kingdom) or to adopt hybrid legislation in which provisions of the Hague-Visby regime feature prominently (e.g., China – Canada’s largest maritime trading partner).

Despite its shortcomings, the Hague-Visby Rules continue to be the marine cargo liability regime that is best able to support Canada’s objective of maintaining uniformity with our major trading partners. Consequently, no action should be taken under section 44 of the MLA to implement the Hamburg Rules.

However, in the coming months, Transport Canada, in consultation with stakeholders, will assess the possibility of making limited amendments to the Marine Liability Act that could: 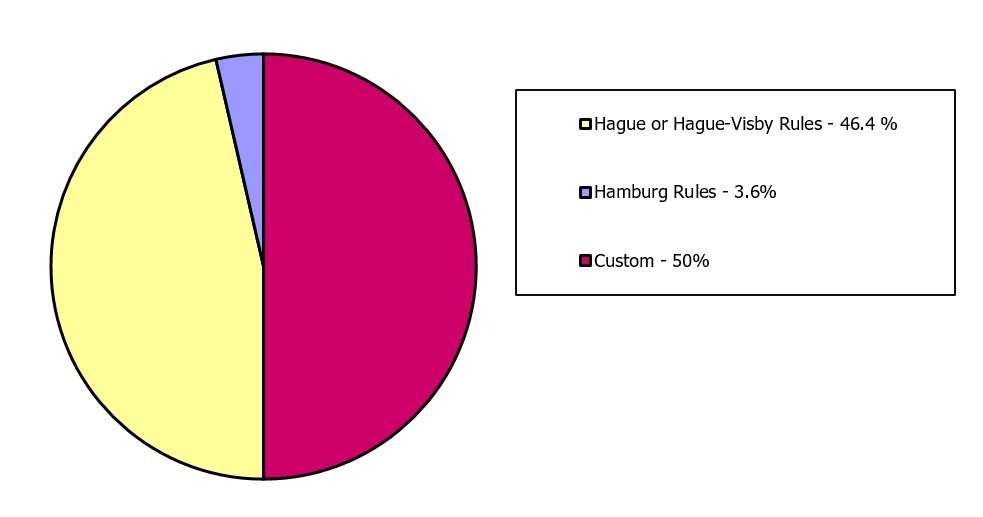