The Marine Transportation Security Clearance Program (MTSCP) was initiated in January 2003 with a commitment to introduce background checks of workers at marine facilities and ports. The purpose of the (MTSCP) is to reduce the risk of security threats by preventing unlawful interference with the marine transportation system by conducting background checks on marine workers who perform certain duties or who have access to certain restricted areas. The (MTSCP) will enhance the security of the marine transportation system, benefiting the public, passengers, marine workers, and operators of vessels, ports and marine facilities. The (MTSCP) is not a new program. Rather, it is an expansion of the existing Transportation Security Clearance Program, which has been in place at Canada’s airports since 1985.

The (MTSCP) was developed and consulted on extensively through a Transport Canada/Industry working group. Originally the MTSCP was to be included in the Regulations that came into force on July 1, 2004, which comprised two rounds of national public consultations. However, to allow for more thorough consultations and policy development, it was held in reserve.

Transport Canada has used stakeholder input throughout the development of the regulations and has incorporated substantial changes as a result:

The Marine Transportation Security Regulations (MTSRs) include provisions for security clearances for marine workers. This means that the Transportation Security Clearance Program, which has been in place since 1985 for airport personnel, extended to the marine sector. The process for submitting and evaluating applications for security clearances will therefore build on the experience gained from Canada's program of background security checks for the aviation sector.  This same program now applies to workers in the marine sector who perform certain duties or have access to certain restricted areas.

The following steps, as outlined in the Marine Transportation Security Clearance Application Process flowchart, are involved in processing an application for a security clearance:

Transport Canada's Intelligence Branch, upon receipt of all the information collected, conducts an evaluation.  The recommendation on whether to grant a security clearance is based on a global evaluation of the information obtained from the applicant and from the background checks, as to whether he/she poses a risk to marine security.  Once the evaluation is completed and there are no concerns, Transport Canada grants the security clearance and notifies the appropriate pass control office or enrolment site.

Note: It should be noted that some stakeholders have suggested that the clearance process be conducted in stages, with concerns at one stage triggering a move to the next stage of checks. In keeping with the goal of ensuring a fair system that identifies persons who might pose a risk to the security of the marine transportation system, it is important to conduct assessments on a more global evaluation of information.  For example, individuals with terrorist connections would not necessarily have criminal records and could potentially be granted a security clearance if the assessment was based on the need for an applicant to have a criminal record before assessing other areas. 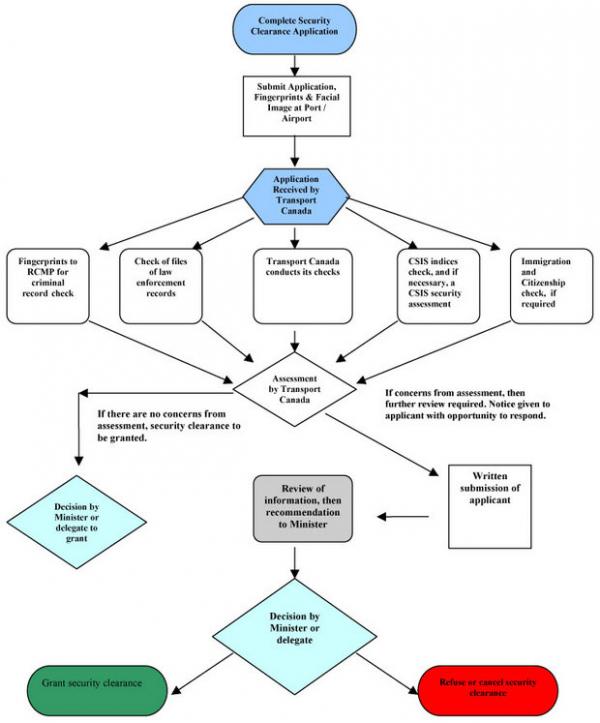 The Office of Reconsideration

The Transportation Appeals Tribunal of Canada (TATC) is a multi-modal, quasi-judicial recourse mechanism. It is available to the air, rail and marine sectors with respect to certain administrative decisions and enforcement actions taken by the Minister of Transport under various pieces of federal transportation legislation, or taken by designated enforcement officers under the Canada Transportation Act.  The TATC recourse mechanism is specific in what it can and cannot do: in punitive-type cases involving "breaking the law", such as the assessment of an administrative monetary penalty, the TATC is able to overturn the decision. In matters having direct safety consequences, such as the competency of a licensed or certified individual, the TATC is limited to confirming the Minister of Transport's decisions or referring them back to the Minister of Transport for reconsideration.  In the long-term, the TATC could perform in a similar way with respect to the (MTSCP) .

It has been suggested that the reconsideration function be performed by the TATC , however, current legislation does not allow for this.  In order to allow the TATC to perform this review function, the following acts would require amendment: Transportation Appeals Tribunal of Canada Act; Aeronautics Act; Marine Transportation Security Act; Railway Safety Act; and Transportation of Dangerous Goods Act.  This course of action would take three to five years to complete. The decision on granting a security clearance is a “judgement” made by the Minister. Therefore, in any case, and even with legislative amendments, the TATC would not be allowed to overturn the decision, but only recommend to the Minister to reconsider the judgement.

In the interim, a short-term solution for the reconsideration process is the Office of Reconsideration (OOR) , which is currently being established in Ottawa. An applicant whose security clearance has been refused or cancelled may apply to this office, which will arrange for an independent assessment of the case and make a recommendation to the Minister. This reconsideration process will operate under the Assistant Deputy Minister of Corporate Services, independent from the Safety and Security Branch and the original decision maker.

After the applicant receives a letter from Transport Canada outlining the reasons for the refusal or cancellation of a security clearance, the steps for application to the OOR include:

In the event there was a change in the individual’s circumstances that led to the security clearance being refused or cancelled, the individual always has the option to reapply.

In some circumstances, the applicant may be able to file a complaint with the Security Intelligence Review Committee (SIRC) , if the security clearance is refused or cancelled based on information collected from CSIS .

The OOR will soon have an operational 1-800-number to provide complete information to the public, as well as a website. Also, the OOR will supply information pamphlets at the enrolment sites where they can be readily available to individuals when applying for a security clearance. 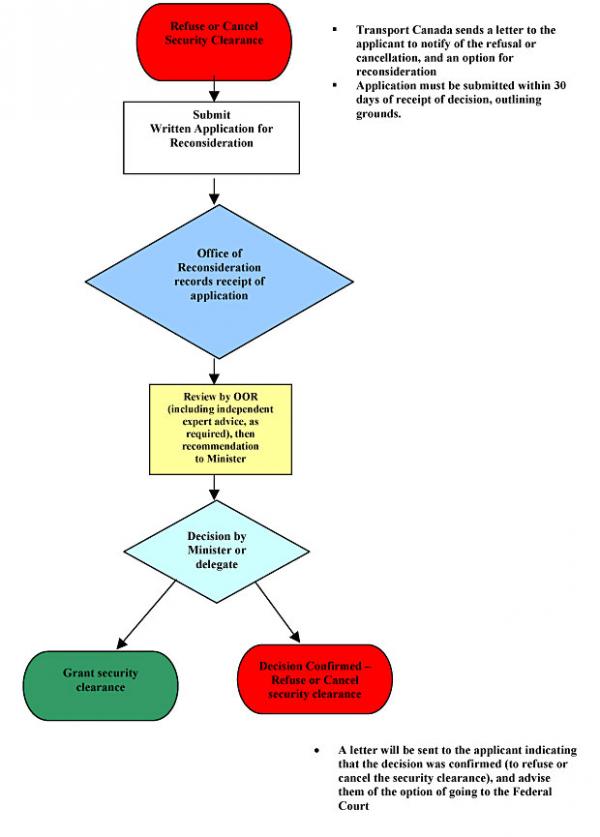 Personal Information to be Collected Directly From Applicants

The following information will be collected from applicants under the Marine Transportation Security Clearance Program:

The Collection of Personal Information

The security clearance process is comprised of two major steps:

Residential history is collected to allow confirmation of the applicant's presence and activities in Canada (or elsewhere).

Travel history is collected to see if an applicant has traveled to a country where there may be security concerns.

The RCMP is responsible for checking criminal information related to an applicant. Only the fingerprints, the name, the place of birth and the gender of the applicant are disclosed to the RCMP .

For all security clearance applicants, the RCMP performs a fingerprint based criminal record check. The computer system at the RCMP that holds fingerprints is separate from the one that holds the reason that a given person's prints are on file. Fingerprints are checked against criminal records, and are never used as latent prints for unsolved crimes. Fingerprints are necessary to verify the identity of the applicant and to distinguish the applicant from another person with the same name or other identifier.

The applicant's information is compared against the criminal intelligence files of the RCMP . This is done to determine if an applicant may be linked to any criminal organizations.

The applicant's information is also checked on the Canadian Police Information Centre (CPIC) database to determine if there are any outstanding warrants against the applicant, and to confirm information found in the criminal record.  All Canadian police agencies provide information to CPIC .

CSIS is a government agency mandated to provide advance warning to government departments and agencies about activities that may reasonably be suspected of constituting threats to the country's security, as defined in section 2 of the CSIS Act, (i.e. espionage and sabotage, terrorism, foreign-influenced activities and subversion). In order to do so, CSIS collects information, to the extent that it is strictly necessary, reports to and advises the Government of Canada.To ensure a balanced approach and protection of the rights and freedoms of the individual, the CSIS Act strictly limits the type of activity that may be investigated, the ways that information may be collected and who may view the information. The CSIS Act provides many controls to ensure adherence to these conditions. CSIS does not have the responsibility to take direct action to counter the security threats. Any direct action is the responsibility of other departments and agencies.

The intent of the exercise and the personal information collected are to determine whether persons being considered for transport security clearances, due to their required access to controlled areas in order to perform their duties, are susceptible to blackmail or otherwise persuaded to engage in activities that represent a threat to the country's security as defined above. Should adverse information surface as a result of the indices checks, CSIS may conduct further inquiries as are required for the purpose of providing security assessments (pursuant to section 13 of the (CSIS) Act). CSIS will also interview the individual so as to have the opportunity to clarify or confront any information of concern.

The collection of personal information about an applicant’s spouse/common-law partner is necessary to determine if the applicant has, or has had, association of concern with individuals who may pose a threat to the security of Canada’s transportation system. CSIS checks these names against their indices.

1. The 'Reasonable Grounds to Suspect' Criterion

Some have questioned whether the appropriate threshold for refusing or canceling a security clearance is at 'known or there are reasonable grounds to suspect', or whether it should be at 'reasonable cause to conclude'.

Sec. 5 (1)(a) of the Marine Transportation Security Act states that regulations may be made to prevent interference that “could occur” with the marine transportation system.This preventative intent of the Act must be upheld, and using “reasonable grounds to suspect” as a threshold for granting, refusing or canceling a security clearance is consistent with our legislation.

Some have questioned whether the Marine Transportation Security Clearance Program protects the privacy of information collected on an individual.

For further clarity, the only two circumstances in which an individual’s information will be shared with a foreign government are:

[1] The collection and use of personal information by Transport Canada is governed by the Privacy Act.