Orbit Baby has determined that the StrongArm™ knob on the affected Car Seat Base G2 units, used to securely tighten the base into the vehicle, may detach or spin without tightening the base, preventing the installation of the car seat base in accordance with the instructions. The affected Car Seat Base G2 units were manufactured between March 20, 2013 and July 20, 2013 with the corresponding batch number A0840, A0860 or A0880. 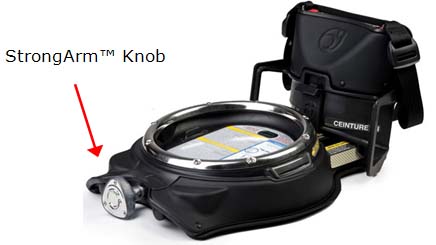 Orbit Baby has received a few consumer complaints that the StrongArm™ knob component of the Orbit Baby Car Seat Base G2 detaches or spins without tightening the base. The company received on July 16, 2013 the first complaint that a US consumer was unable to install the car seat base because the knob had detached and the consumer requested a replacement component. In Canada, as of October 23, 2013, one complaint regarding this issue with the affected units has been reported, but there has not been any report of injury related to this issue worldwide.

A free repair kit consisting of a barrel nut, screw, allen wrench and repair instructions in both official languages will be made available to all registered owners and retailers with affected car seat bases. A consumer can confirm whether a Car Seat Base G2 (Model No. ORB822000) is affected by verifying the "Date Manufactured" (between March 20, 2013 and July 20, 2013) and the Batch Number (A0840, A0860 and A0880). The label with the "Date Manufactured" and Batch Number is found on the back of the base’s upright portion.

Non-registered owners, or owners who have moved, should contact the Canadian distributor, ALCA Distribution, at their toll-free number (1-866-531-3255) to obtain a free repair kit or if they have any questions. Detailed instructions concerning this notice are also available online at: http://ca.orbitbaby.com/support/safety-update/.