Collected in cooperation with the Canadian Council of Motor Transport Administrators

Personal injury collisions" include all reported motor vehicle crashes which resulted in at least one injury but not death within 30 days of the collision, except in Quebec (eight days).

"Fatalities" include all those who died as a result of a reported traffic collision within 30 days of its occurrence, except in Quebec (eight days).

"Serious injuries" include persons admitted to hospital for treatment or observation. Serious injuries were estimated from 1991 to 2010 because several jurisdictions under-reported these numbers.

"Total injuries" include all reported severity of injuries ranging from minimal to serious.

Fatalities and Injuries by Age Group 2010 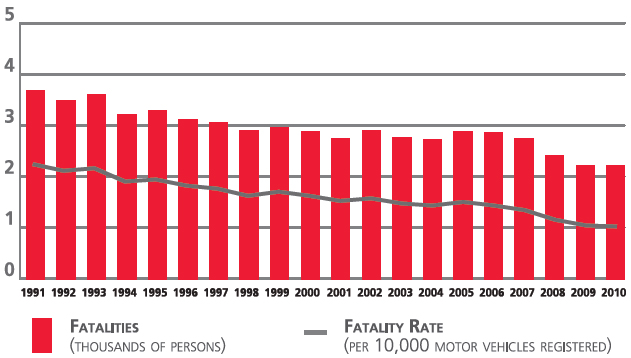 Number of Licensed Drivers by Gender and by Age 2010 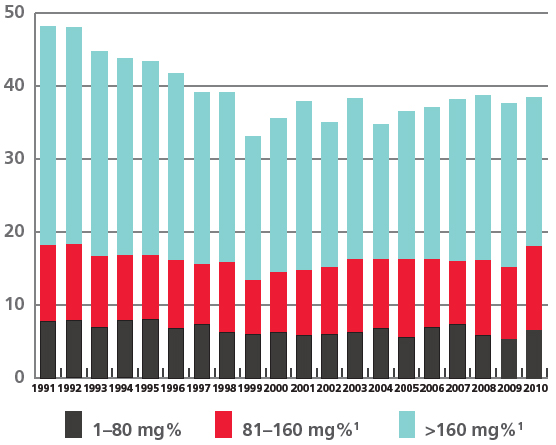 BAC: Blood Alcohol Concentration.
mg%: Weight of alcohol in the bloodstream stated as milligrams in 100 millilitres of blood.

Percentage of Fatalities and Serious Injuries by Road User Class 2010

Number of Collisions by Location 2010

© Her Majesty the Queen in Right of Canada, represented by the Minister of Transport, 2012.

To request permission to reproduce materials from this publication for commercial purposes, contact: