Discharges to water from a ship can occur both through normal operations or incidents and accidents. Different types of discharges include oil, oily water, sewage, garbage, grey water, and cargo (liquid or dry).

Discharges can have a range of impacts on the environment. Oil discharges to water can be toxic to marine life, are very difficult to clean up, and can last for years in ocean sediment and the marine environment. Marine species constantly exposed to oil and its components can exhibit developmental problems, susceptibility to disease, and abnormal reproductive cycles. Other types of liquid discharges can contain potentially toxic chemicals, which adhere to tiny particles that are then taken up by plankton and bottom-feeding animals, concentrating the substance upward within ocean food chains.

The presence of garbage, dry cargo, and other debris in waters as a result of accidental or intentional release results in a number of environmental impacts. These range from damage to marine habitat, entanglement of wildlife, ingestion of plastics and other unsuitable items by marine mammals and birds, as well as creating the potential for vessel damage through collisions, and creating a navigational hazard.

Within Canadian Arctic waters, the Arctic Waters Pollution Prevention Act (AWPPA) and related regulations control the discharge of waste in the Arctic. The AWPPA prohibits the discharge of waste, with the exception of untreated sewage, and provides for the appointment of Pollution Prevention Officers to enforce this prohibition. Under the AWPPA "waste" is defined as:

Canada’s regulatory regime for the control of oil discharges elsewhere in Canada is contained in Division 1 of the Regulations for the Prevention of Pollution from Ships and for Dangerous Chemicals.

In Arctic waters, the discharge of sewage is governed by the AWPPA and its regulations. The Arctic Shipping Pollution Prevention Regulations currently allow for the discharge of human or animal waste generated on board a ship.

Elsewhere in Canadian waters, the regulatory regime for the control of sewage discharges is contained in Division 4 of the Regulations for the Prevention of Pollution from Ships and for Dangerous Chemicals.

The AWPPA prohibits discharge of any waste in Arctic waters (with the exception of untreated sewage, as mentioned above). Discharges of garbage throughout the rest of Canadian waters are governed by the Division 5 of the Regulations for the Prevention of Pollution from Ships and for Dangerous Chemicals, under the Canada Shipping Act 2001. These regulations set out rules governing the discharge of garbage, procedures for the management of garbage, the maintenance of records of garbage disposal, and the provision of reception facilities at ports or terminals internationally. 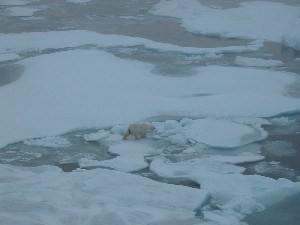 The AWPPA prohibits discharge of any waste in Arctic waters (with the exception of untreated sewage, as mentioned above).