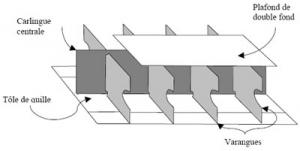 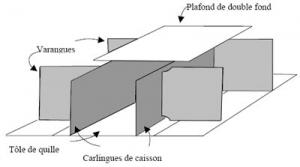 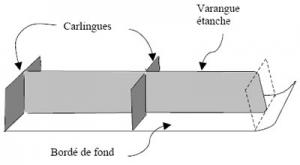 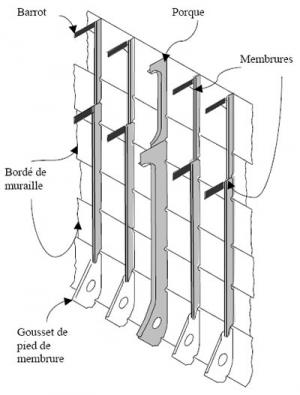 A double bottom maintains a ship's watertight integrity when the bottom is damaged. The tank top greatly increases a ship's longitudinal strength and forms a platform to carry the ship's cargo and machinery. 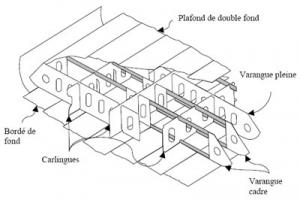 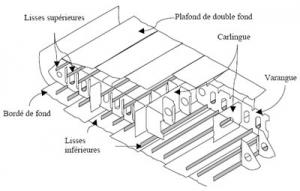 Transverse framing is used primarily for ships less than 120 metres in length. The floors, frames and beams form rings spaced closely together. Longitudinal strength is provided by the keel, centre girder, side girders, deck girders, the entire bottom, deck and side shell plating, and the tank top. Transverse framing ensures good cross sectional strength to handle overall stresses, vertical loads, rolling and dry docking. However, on very long ships, sheer stresses can cause deformations between the rings.

Longitudinal framing is mandatory for very large ships, oil tankers and bulk-ore carriers. The rings are formed of floors, deck beams and web frames that replace the frames. These rings are farther apart than in transverse framing. The longitudinal reinforcement members are deck girders, girders, the keel and a large number of deck, bottom and side longitudinals. The longitudinals are slender but there are very many of them.

4.3. Stresses and constraints on ship structure

These stresses are measured when the ship is not under way. They are often caused by a poor longitudinal distribution of mass. Even if the ship's total weight is balanced by the total force of buoyancy, these forces may not be distributed evenly along the full length of the ship. 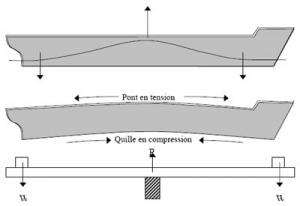 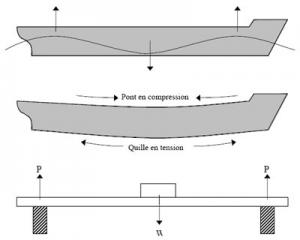 The stresses caused by these situations can be calculated using the load curves table, the stress and sheer curves table, and the bending moments table. Manual or electronic calculators also exist to find the value of the stresses on the hull. The maximum permissible stress values can be found in the ship's stability book.

When a ship is under way, some situations create additional stresses. They are caused primarily by the effect of waves on the hull in rough seas. Two of these are pounding and panting.

A watertight bulkhead is a transverse bulkhead mounted on the tank top and it must extend right to the uppermost continuous deck.

Watertight bulkheads are installed to:

In some situations, it is necessary to pierce bulkheads to allow crew or passengers through. In this case, a sliding watertight door is installed. An example of this situation is the watertight door that is found on some ships between the machinery space and the shaft tunnel. Liners have many of these doors that allow passengers to go between the different sections of the ship. These watertight doors are usually hydraulically activated. Local control stations must be located on either side of the door. In addition, a remote control station (generally located in the wheelhouse) must be placed outside both compartments separated by the watertight bulkhead.

Chapter II-1, Regulation 15 of the SOLAS Convention governs the installation and operating requirements for these doors.

7.1.6: [A watertight door] shall be provided with an audible alarm, distinct from any other alarm in the area, which will sound whenever the door is closed remotely by power and which shall sound for at least 5 s but no more than 10 s before the door begins to move and shall continue sounding until the door is completely closed. In the case of remote hand operation it is sufficient for the audible alarm to sound only when the door is moving. Additionally, in passenger areas and areas of high ambient noise the Administration may require the audible alarm to be supplemented by an intermittent visual signal at the door; and

7.1.7: shall have an approximately uniform rate of closure under power. The closure time, from the time the door begins to move to the time it reaches the completely closed position, shall in no case be less than 20 s or more than 40 s with the ship in the upright position. 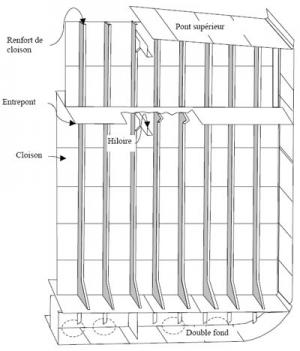 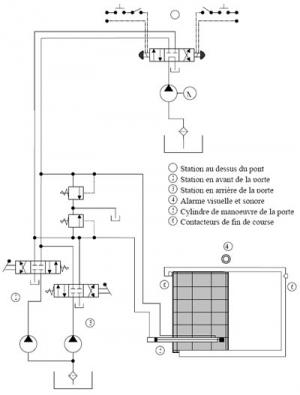