Grouping these organizations into one portfolio allows for integrated decision-making on transportation issues.

Transport Canada administers over 50 laws related to transportation Endnoteix and shares the administration of many others. Justice Canada is the federal department responsible for maintaining the Consolidated Statutes of CanadaEndnotexi and provides access to the full text of federal acts and regulations.

A safe and secure transportation system provides reliable and efficient movement of goods and people across the country and around the world. In an environmentally responsible way, it meets the challenges posed by topography and geography, linking communities and reducing the effects of the distance that separates people. These vital roles reflect transportation's interdependent relationship with all sectors of the economy and society.

A transportation system in Canada that is recognized worldwide as safe and secure, efficient and environmentally responsible.

Transport Canada’s vision of a sustainable transportation system integrates social, economic and environmental objectives. Our vision’s three guiding principles are to work towards:

Transport Canada has sole responsibility for matters such as aviation safety and security; for other matters, we share responsibility with other government departments, and provincial, territorial and municipal governments. We also work with trading partners and international organizations to understand and harmonize policy and administrative frameworks, so as to protect Canadian users of the global transportation system, while encouraging efficiency.

In areas for which Transport Canada does not have direct responsibility—for example, for building and maintaining road networks—we use strategic funding and partnerships to promote the safe, efficient and environmentally responsible movement of people and goods into and across the country. In this way, we play a leadership role to ensure that all parts of the transportation system across Canada and worldwide work together, effectively and efficiently. 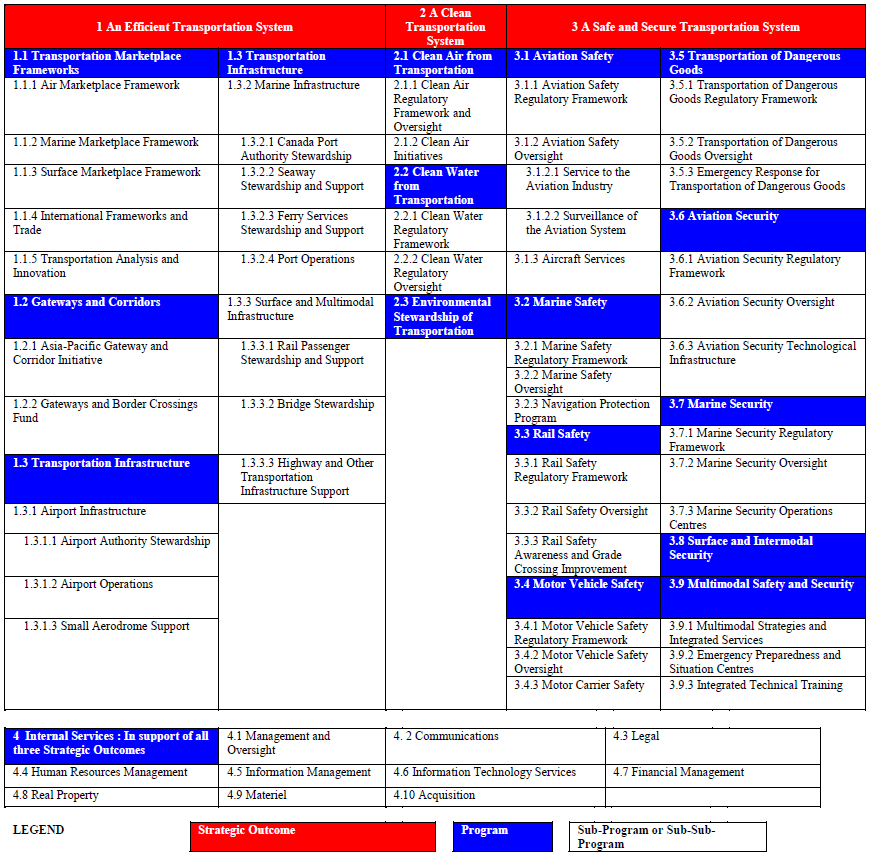 Transport Canada has identified four priorities for 2016-17. They align with Government of Canada (GoC) priorities, support the achievement of our Strategic Outcomes and help the department address risks. Over the course of the year, senior management will pay special attention to the plans developed to meet these priorities and achieve results.

Canada’s transportation system continues to be one of the safest and most secure in the world. Long-term trends show overall declines in the rate of accidents and incidents across all modes of transportation. However, safety and security practices and mechanisms must be able to address shifting conditions and requirements in an agile manner, including where appropriate, harmonization among transportation modes. Security threats, affecting all modes of the transportation system, as well as cyber attacks and phishing scams, will require continued vigilance.

In the planning period and beyond, pressures will present challenges and opportunities for the transportation system. Examples include:

Northern communities are particularly affected by accessibility and development issues. The impacts of a changing climate remain an ongoing concern.

The figure below shows three key opportunity areas, their residual impact and likelihood, while accounting for risk mitigation measures. 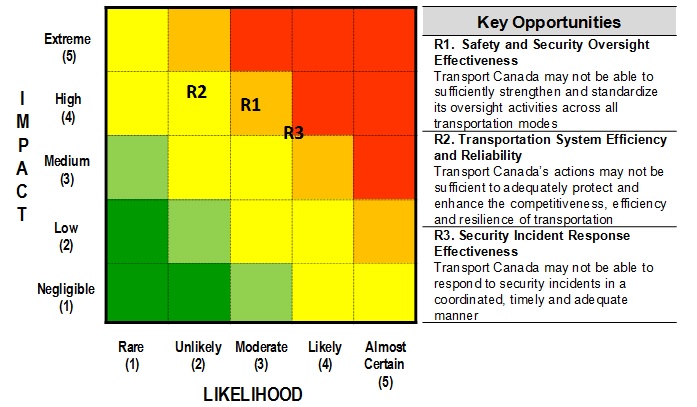 The table below presents the key elements of Transport Canada’s risk response strategy:

The following financial resources table provides a summary of the total planned spending for Transport Canada for the next three fiscal years. For more details on Planned Spending, including adjustments, please visit Transport Canada’s website.

The following tables present the:

Note: Includes funding for all votes and statutory items. A trend analysis and explanation of variances follows.

Planned spending in An Efficient Transportation System is mostly impacted by cash flow changes in projects under the Asia-Pacific Gateway and Corridor InitiativeEndnotexiv and the Gateways and Border Crossings FundEndnotexvi. Funding levels for these programs normally fluctuate based on planned projects; however, funding levels start decreasing in 2015–16 as the programs reach their maturity or sunsetting date. For example, a peak in planned spending under Transportation Infrastructure occurred in 2014–15, due to the purchase of a replacement ferry vessel, followed by a gradual decline as a result of expected decreases in statutory payments to the St. Lawrence Seaway Management Corporation and sunsetting programs such as the Ports Asset Transfer ProgramEndnotexvii and the Ferry Services Contribution ProgramEndnotexviii.

A Safe and Secure Transportation System

Planned spending for A Safe and Secure Transportation System varies over the planning horizon as a result of some internal funding reallocations, in order to better align expenditures with Transport Canada’s Program Alignment Architecture. Spending also varies from year to year as a result of changes in the type and number of investment projects undertaken each year and the varying demand for transfer payments programs (e.g. Rail Safety). Forecast spending in 2014–15 and 2015–16 also spiked in Marine Safety, Transportation of Dangerous Goods and Multimodal Safety and Security as a result of expected increased activity in these areas. The increase for Rail Safety in 2015–16 is the result of a one-time out-of-court settlement included in the 2015–16 forecast expenditures. The increase for Aviation Safety in 2017–18 is the result of capital funding for the Federal Infrastructure Initiative. Operating and Grants & Contributions funding is expected to remain fairly consistent after 2016–17, while variances in planned spending are mostly related to changes in cash flows for capital projects.

Planned spending for Internal Services decreases in future years mostly as a result of the reduced funding levels for the internal services component of sunsetting programs. Spending can also vary from year to year as a result of changes in the type and number of investment projects undertaken each year.

Alignment of Spending With the Whole-of-Government Framework

For the 2016–17 fiscal year, Transport Canada plans to spend $1,266 million to meet the expected results of its program activities and to contribute to its strategic outcomes. This represents a net decrease in planned spending of $356 million from the 2015–16 forecast spending level of $1,622 million.

The decrease from 2015–16 to 2016–17 is the result of reduced spending plans on projects such as the Federal Contaminated Sites Action Plan, the Next Generation of Clean Transportation, the Ferry Services Contribution Program, and the Ports Asset Transfer Program, as funding for these projects approaches or reaches its maturity date. Other factors contributing to the decrease include the transfer of the Detroit River International Crossing project and team to Infrastructure Canada as well as a one-time, out-of-court settlement included in the 2015–16 forecast expenditures. These decreases are offset by an increase in planned spending for the Federal Infrastructure Initiative.

Overall, spending plans continue to decline after 2016–17, mostly as a result of a reduction in planned spending for the Asia-Pacific Gateway and Corridor Initiative, the Gateways and Border Crossings Fund and the Federal Infrastructure Initiative, as these initiatives reach their maturity dates. 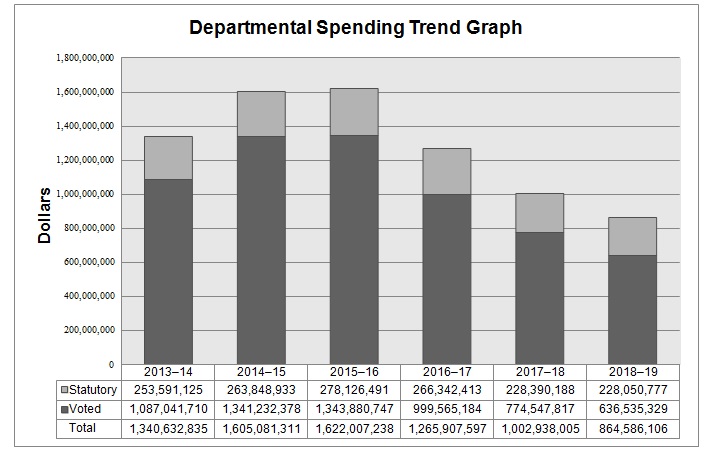 For information on Transport Canada’s organizational appropriations, consult the 2016–17 Main EstimatesEndnotexxi on the Treasury Board of Canada Secretariat website.

TBD = To Be Determined

Starting in 2014–15, the Program Alignment Architecture was modified and Program 1.4 Transportation Analysis and Innovation was mostly incorporated in Program 1.1 Transportation Marketplace Frameworks.