The content of this chapter of the Airworthiness Standards is based on the Joint Aviation Requirements, JAR-22 entitled "Gliders and Powered Gliders". These JAR airworthiness standards have been used and adapted as the model for the Canadian standards supplemented by additional airworthiness requirements based on operational experience and environmental conditions in Canada.

The standards in this chapter are presented in a two column format with the JAR presented in the left column and the Canadian standards in the right column. Chapters, sub-chapters, sections and subsections numbering and headings are opposite to the equivalent JAR. Where the Canadian standard is identical to the JAR, the words "No Variation" appear; where a variation exits, the affected part of text is printed opposite to the JAR with all changes underlined.

The JAR numbering system is used; the Canadian standards bears the same number as the JAR equivalent, prefixed by the number "5", as this chapter forms part of Series 5 of the Canadian Aeronautics Code.

The content of this chapter is based on the Joint Aviation Requirements, JAR 22, "Gliders and Powered Gliders", as amended to and including Amendment 3, effective January 31, 1983, published by the government of the United Kingdom on behalf of the Joint Aviation Authorities Steering Committee.

Change 4 to JAR-22 published by the Joint Aviation Authorities Steering Committee on May 7, 1987, which includes the following JAR 22 amendments:

This change incorporates the following amendments to JAR 22, published as "Orange Pages" by the Joint Aviation Authorities (JAA):

This change also includes the rewriting of the original "Introduction" and "Foreword" in the form of "Preamble" and the issue of Revision B of AMA 522/1.

The First Edition of this Chapter included some Canadian variations which mostly originated from FAA AC 21.17-2. In the reissue "A" of this AC, dated February 10, 1993 some of the additional FAA requirements were withdrawn.

To achieve greater international harmonization some of the original differences are revoked by this change, as follows:

In addition, the Preamble to change 522-2 has been corrected for completeness and clarity, and several editorial corrections to the existing text have been made.

In accordance with the CARAC simplified process for the amendment of design standards, this change incorporates JAR 22 Change 5 and Amendment 6, as published by the Joint Aviation Authorities prior to the creation of the European Aviation Safety Agency (EASA). As described below, this amendment also deletes three Canadian variations and adds one variation.

This change incorporates the following amendments:

This amendment adopts JAR-22 Orange Paper Amendment 22/94/1 into the standards of AWM Chapter 522 for gliders and powered gliders. With the exception of existing Canadian variations, this amendment reflects the requirements published in JAR-22 Change 5, dated 28 October 1995.

This amendment deletes the Canadian variation to JAR-22 paragraph 22.147, harmonizing this requirement.

This amendment removes Canadian variations 522.1581(c)(2) and (d) with respect to JAR-22, relating to the presentation of metric units and reference to foreign operating rules in the Flight Manual, harmonizing this requirement. Transport Canada issued Airworthiness Manual Advisory (AMA) 500/13 to provide guidance on the format and content of Flight Manuals.

This amendment introduces the requirement for the use of metric units on placards and markings at fuel and oil tank openings of powered gliders. This requirement is consistent with what has been required for many years to all powered aircraft in Canada.

This amendment entitled “Editorial” makes editorial corrections to provisions of AWM Chapter 522 already incorporated by reference from JAR-22 Sailplanes and Powered Sailplanes. AWM Chapter 522 has inadvertently contained editorial errors with respect to the adopted standards of JAR-22. Therefore, these editorial and other corrections are needed to realign the AWM with respect to the already incorporated JAR-22 amendments.

This amendment entitiled “JAR-22 Amendment 7” adopts by reference Amendment 7 of JAR-22, issued by the Joint Aviation Authorities (JAA) on September 1, 2003.

This amendment entitled “CS-22” adopts by reference changes introduced by Certification Specifications CS-22 (ED No. 2003/13/RM), issued by the European Aviation Safety Agency (EASA) that entered into force on November 14, 2003.

Chapter 522 of the Airworthiness Manual (AWM) was originally based on the standards of the Joint Aviation Authorities requirements JAR-22. However, on September 28, 2003, the European Aviation Safety Agency (EASA) was created and on November 14, 2003, the new Certification Specifications (CS) were put into force.

The new Certification Specifications for Sailplanes and Powered Sailplanes «CS-22» are introduced by EASA to replace JAR-22. The requirements of CS-22 and are now being used by Transport Canada as the basis for the Canadian airworthiness standards for Gliders and Powered Gliders, supplemented by additional airworthiness requirements based on operational experience and environmental conditions in Canada.

Note that Appendices F, G, I, J and K are now formally included into AWM Chapter 522, as per CS-22 Book 1, and are hence now removed from Transport Canada Advisory Circular 522-001 at Issue 2.

In addition, with publication of CAR 521, the following Chapters of the Airworthiness Manual have been withdrawn:

This change amends section 522.1 to reflect changes in legal drafting style, in terminology and in references required because of the introduction of CAR 521. In addition, subsection 521.31(1) of the CARs is now used to legally enable this Chapter of the AWM.

Proposed adoption by reference of changes introduced by the Certification Specification CS-22 Amendment 1, issued by the European Aviation Safety Agency (EASA) that entered into force on January 10, 2008.

As discussed in the EASA NPA 2007-12, the objective of this amendment is to improve the occupant protection against serious injuries with lasting effects and enhance the survivability chances in case of emergency landing conditions. In particular, this amendment introduces structural requirements for emergency landing conditions corresponding to the improvements in glider design achieved within the last 20 years and to incorporate the results of research programmes related to the crashworthiness of glider cockpits.

The revised section 522.561 of the CARs, Emergency Landing Conditions, reflects the current knowledge for protecting glider occupants against serious injury during emergency (outfield) landings and impacts, following recovery from emergency situations close to the ground. The increased loads in the revised section 522.561 of the CARs, also take into account the introduction of Glider Parachute Rescue Systems (GPRS), which after activation brings the glider or its damaged body to the ground at a vertical speed of maximum 8 m/sec and approximately 45º negative pitch.

This notice of proposed amendment modifies the emergency exit design standards in light of accidents and incidents involving escape from an aircraft in an inverted position. It introduces a requirement that crash attitudes, such as turnover, be considered in the design.

The Agency has received two safety recommendations following unrelated accidents to UK registered aeroplanes. In both cases, non-fatal accidents occurred where the aeroplanes came to rest in an inverted position with the occupants unable to escape unaided due to the design of the canopy, which opened upwards.

This notice of proposed amendment is to make a correction to section 522.1947 of the Airworthiness Manual that was erroneously revised at Change 522-5. There originally was and currently is no intent to have a technical difference between section 522.1947 and CS 22.1947.

This change contains the following:

This amendment revises the design standards of Chapter 522 of the Airworthiness Manual (AWM) Section 522.01 as it is no longer required. Chapter 522 originally laid out the standards for gliders and powered gliders by presenting the European source code Joint Aviation Requirements (JAR) 22 Sailplanes and Powered Sailplanes directly. AWM 522.01 provided tailoring of the European term “Sailplane” to the Canadian term “Glider”. AWM 522.01 became unnecessary at Change 522-4 when the JAR 22 text was no longer used directly within the AWM.

Prior to Change 522-4, Chapter 522 was presented in a two column format with the text of the Joint Aviation Requirements (JAR) 22 adopted by reference on the left, and the AWM variations, if any, on the right. If no variation existed, the JAR 22 text was adopted without change, but subject to the tailoring for the Transport Canada context.

The two column format was discontinued at Change 522-4 in favour of a Canadian-only standard published in a “newspaper column format” and made pursuant to the then newly introduced Canadian Aviation Regulations (CARs). With the newly published Canadian-only version of Chapter 522, the tailoring previously necessary and specified in AWM 522.01 was no longer relevant, but to the present day has never been removed.

This amendment removes section 522.01 of the Airworthiness Manual, which is no longer necessary. The change has no effect on the present interpretation of Chapter 522. 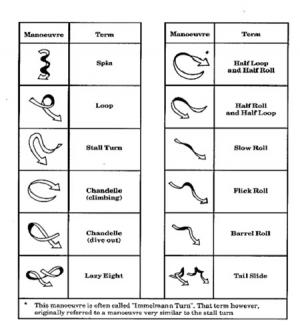 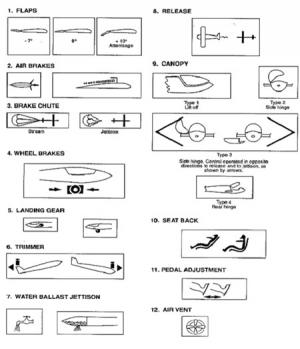 For the H-point determination, the thigh contact area and the seat level are the two reference areas in a cockpit.

Aerotowing of more than one glider at a time needs further consideration and is not covered by this Appendix.

The minimum aerotowing speed must not be less than 1.3 VS1 of either the powered glider or the aerotowed glider, whichever is the higher.

Note: This information should normally be furnished under Section 9 of the Flight Manual.