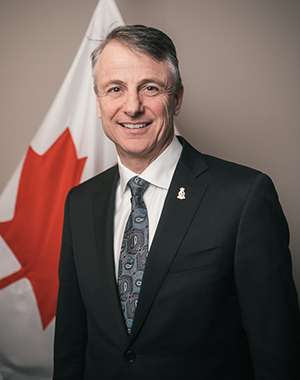 If there’s one thing that the past year has reminded us, it’s that we are all connected. From coast-to-coast-to-coast, we rely on each other and the natural ecosystems that support us. This is a message that our Indigenous partners have been driving home to us for generations.

The concept of a blue economy is one that allows the ocean economy to grow, while also ensuring a sustainable approach for future generations. This helps guide what we do as part of the Oceans Protection Plan, whether it is ecosystem protection and restoration, evidence-base decision making, marine shipping, or our partnerships.

Together, we’re creating a stronger marine safety system that provides economic opportunities for Canadians today, while protecting our coastlines and oceans for generations to come. As just one example, last year, the Coastal Nations Coast Guard Auxiliary commenced on-water operations in the territorial waters of the Ahousaht and Heiltsuk First Nations, making it the first Indigenous-led Canadian Coast Guard auxiliary in the country.

It’s partnerships like this, among many others, that will help us create a more resilient future. After all, the Oceans Protection Plan may be ambitious in its scope, but when it comes down to it, it is fundamentally about working together with partners in industry, coastal communities, and of course, Indigenous Peoples, to achieve collective aims. 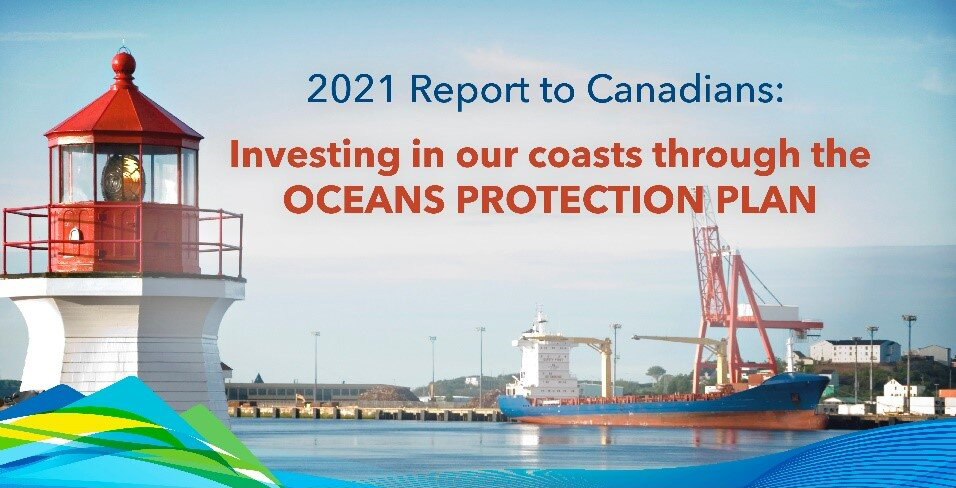 This year’s theme, ‘The Ocean: Life & Livelihoods’, reminds us how important the oceans are to life on the planet and to many people’s livelihoods. In Canada, they are the source of nearly 300,000 jobs, and we rely on healthy marine ecosystems to sustain our food supply and the vibrancy of our coastal communities. Economies around the world depend on the health and resilience of our oceans. We know that we have to protect them to ensure a better future for all of us.

The Oceans Protection Plan is doing its part to safeguard Canada’s coasts and waterways. The 4th Report to Canadians — a summary of the work accomplished since 2016 through Canada’s Oceans Protection Plan—provides results across more than 50 initiatives and hundreds of projects from coast-to-coast-to-coast, including over 1,200 engagement sessions with Indigenous Peoples and marine stakeholders.

Dillon Point has been the Indigenous Marine Liaison Officer (IMLO) for the Mohawk Council of Akwesasne (MCA) for the past three years. Akwesasne is a coastal community located along the St. Lawrence River, uniquely divided between the provinces of Quebec and Ontario. Dillon works in the Environment Department of the MCA to facilitate collaboration with the Canadian Coast Guard (CCG). In this role, Dillon has worked on several Oceans Protection Plan initiatives. For example, he has participated in meetings and provided feedback on a number of projects, including new online marine awareness platforms as well as Vessels of Concern.

He also played a major role in ongoing discussions with the MCA and local emergency services regarding Search and Rescue capacity in the area, which is a matter of concern to the community. Most recently, Dillon organized discussions with relevant partners and CCG regarding the Risk-Based Analysis for Maritime Search and Rescue Delivery. He also participated in numerous recruitment events on behalf of CCG and is currently involved in organizing a virtual event to present employment opportunities for members of communities.

Dillon has proven to be an asset in strengthening the relationship between CCG and the MCA. Like Dillon, all IMLOs have served as a bridge between CCG and Indigenous groups, allowing both parties to gain valuable experience. The creation of these positions has led to a significant improvement in communication and collaboration, which has greatly benefitted the Canadian Coast Guard’s relationship with Indigenous partners.

Do you have an OPP story to share? Email us at TC.OPPEngagement-MobilisationPPO.TC@tc.gc.ca

Canada’s oceans and waterways are the heartbeat of our coastal communities. For many, it’s a place they call home; while for others, it’s where they go to earn a living. Thanks to the progress we made together with our partners—such as Indigenous Peoples, local communities, the marine industry, and academia—we are protecting our environment, making marine shipping safer, and responding better to marine incidents along Canada’s coastlines.

We want to share what has been done through the Oceans Protection Plan across Canada. Some of these achievements include:

From coast-to-coast-to-coast, the Oceans Protection Plan has led to safer marine shipping, greater protection for our coastal ecosystems, improved prevention and response to marine incidents, and stronger partnerships with Indigenous and coastal communities. Looking to have your say on keeping our coasts and waterways protected? Register on our Let’s Talk Transportation page to join the conversation and get involved!

Environment and Climate Change Canada research scientists, meteorologists, and other experts in environmental response and ocean science have been developing new cutting-edge technologies to help responders deal with environmental emergencies on the water.

As part of the Oceans Protection Plan’s enhanced 24/7 response capacity initiative, this team, located at the Canadian Centre for Meteorological and Environmental Prediction in Dorval, Quebec, has developed new, higher resolution and more sophisticated coastal ocean, wave, and ice forecasting tools for Canada’s three coastlines. These tools improve responders’ ability to estimate the extent of oil spills and project the movements of objects adrift, including people and vessels in distress.

They have also built hydrological models that cover the full water cycle from the Great Lakes to the Atlantic Ocean, including the St. Lawrence Seaway, giving us a better understanding of the complex workings of this vast watershed. This is a valuable addition to Canada’s ocean knowledge, as these waterways are an important source of fresh water for millions of people and home to many sensitive ecosystems vulnerable to marine pollution incidents.

Ultimately, these enhanced tools have increased the quality and quantity of information that responders can access when responding to on-water emergencies and reacting to local changes in environmental conditions.

Abandoned boats—they are often wrecked, sinking, sad, and ugly eyesores. But did you know they also have economic, social, safety, and environmental impacts on local communities? For example, they can release pollutants that can harm our waters and can pose a health and safety risk to wildlife and to Canadians.

Through the Oceans Protection Plan, the Government of Canada is committed to working on and building awareness around the problem of abandoned boats. For example, under the Wrecked, Abandoned or Hazardous Vessels Act, introduced in 2019, vessel owners’ responsibility was increased by making it illegal to abandon your boat in Canadian waters or cause it to become a wreck by failing to maintain it properly. Back in 2017, the Government of Canada launched two vessel removal programs: Transport Canada’s Abandoned Boats Program and Fisheries and Oceans Canada’s Small Craft Harbours Abandoned and Wrecked Vessels Removal Program for federally owned small craft harbours. In February 2021, Transport Canada announced newly approved funding under the Abandoned Boats Program for 44 additional boat assessments and 51 more boat removals across the country. Taken together, these two programs have provided funding for 153 assessment projects, 258 vessel removal projects, five education and awareness projects, and three research projects in Canada.

So how does a boat get removed? When the Government of Canada is first notified of an abandoned boat or wreck, it works with the owner to assess and help respond to the situation. If an owner can’t be identified, Transport Canada can authorize someone to take possession of the vessel. Transport Canada can also work with the community to remove the abandoned vessel, especially in smaller and remote areas, where access to wreck removal resources may not be available. Once the vessel is removed from the water, all hazardous and recyclable materials are disposed of appropriately to ensure minimal environmental impact.

Do your part. Everyone can keep our coasts safe and clean. Each boat is unique, so if you come across a suspected abandoned boat or wreck in the water, ask yourselves these questions:

Abandoned boats don’t belong in our waterways and should always be disposed and recycled properly. By doing so, we can ensure that our oceans, coasts, and communities are as protected and healthy as possible!

Learn more about the projects funded under the Abandoned Boats Program

The Big Red Planes of NASP 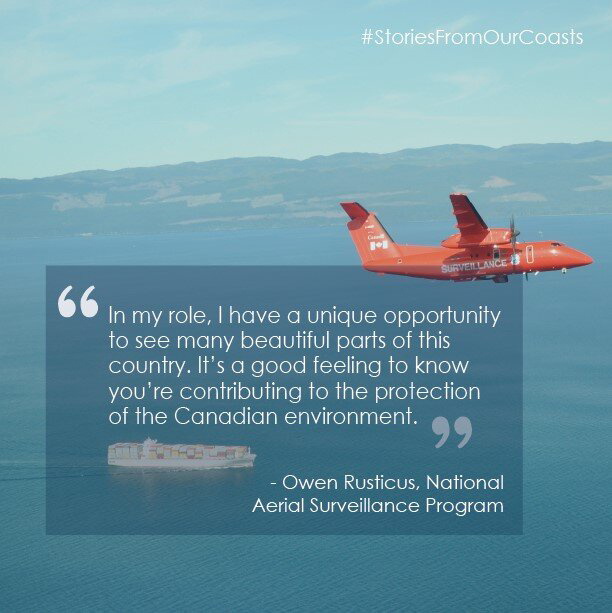 Canada’s coastline is the longest in the world—more than 200,000 kilometres on three coasts and the five Great Lakes, not to mention the abundance of lakes across our beautiful country.

The main responsibility of monitoring our oceans and waterways for pollution belongs to Transport Canada’s National Aerial Surveillance Program (NASP). Since 1991, the program has used their iconic red planes to monitor shipping activities, and ice conditions, and to support marine security, police investigations, search and rescue incidents, and civil emergencies.

Over the past 30 years, the program has grown tremendously, and today's NASP fleet includes four aircraft based strategically across Canada for effective monitoring and rapid response to incidents. Each surveillance aircraft is equipped with state-of-the-art remote-sensing gear, including side-looking airborne radar, ultraviolet infrared line scanner, and a Canadian-made electro-optical infrared camera system.

Through the Oceans Protection Plan, the NASP has strengthened its eyes in the sky with a new Dash-8 aircraft and new equipment, including a new maritime surveillance radar and state-of-the-art infra-red camera systems, now being installed in all aircraft in the NASP fleet. In addition to these investments, the NASP has contributed over 1,300 hours total of aerial surveillance in the Arctic, which was funded by the Oceans Protection Plan.

The important work done by the crew on each NASP surveillance flight protects Canada’s ocean resources and fragile marine ecosystems for the benefit of coastal communities and all Canadians. Thanks to these investments, our marine safety system is stronger and our marine environment is better protected than ever before.

By the way, it’s NASP’s 30th birthday this year! Celebrate by learning more about them: National Aerial Surveillance Program

Underwater noise generated by vessels has been identified as one of the key threats to Canada’s endangered marine mammal populations. Acoustic disturbances can impair their ability to locate prey, reproduce, communicate, and navigate effectively, while also causing them stress. To help mitigate these acoustic disturbances, Transport Canada has provided, through the Quiet Vessel Initiative, $2.5 million in funding over three years to support the development and operation of a world-class marine acoustic research station in the St. Lawrence Estuary, near Rimouski. The Ministère de l'Économie et de l'Innovation du Québec is also contributing financially to this project, providing $1.5 million.

In addition to underwater recordings, noise and vibration measurements will be taken on-board selected partner vessels in order to identify the primary sources of on-board noise. The relationship between a vessel’s operating conditions (e.g., speed, draft), on-board machinery (e.g., engines, pumps, equipment), and the underwater noise it generates, will be studied to better understand the environmental impacts of marine shipping in the St. Lawrence Estuary. The project aims to develop mitigation measures and guidance for vessel owner/operators to reduce acoustic disturbances on the marine environment and vulnerable marine mammals, such as the beluga whale population of the St. Lawrence Estuary.