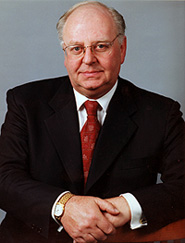 Captain Gordon Houston is the former President and CEO of the Vancouver Fraser Port Authority. He attended Edinburgh University's Nautical Campus receiving the designation of Master Mariner in 1975. He also holds a nautical science diploma from Aigburth Nautical College. After a seagoing career spanning three decades, Captain Houston joined the Prince Rupert Port Corporation as Harbour Master in 1988. Later, he joined the Vancouver Port Authority, as Deputy Harbour Master, and then as Harbour Master where, among his other duties, he represented the Port during the creation of Canada's current Ship-source Oil Spill Preparedness and Response Regime.

In 1996, he moved into the Port's executive ranks, as Vice President, Operations. After five years in this role, Captain Houston was appointed President and CEO of the Vancouver Port Authority where he oversaw the amalgamation of the three ports in the Lower Mainland.